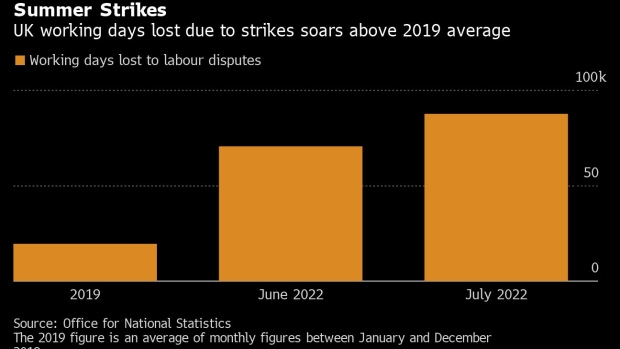 More than 150,000 working days were lost due to labor disputes across June and July, far above the pre-pandemic average, official figures show.

The UK continues to be beset by industrial action as workers seek to keep up with the highest inflation in four decades. Rail strikes are scheduled for Saturday, while dock workers at Felixstowe, the UK’s largest container port, began an eight day stoppage on Tuesday. Separately, postal workers at Royal Mail Plc announced plans for 19 days of walkouts in October and November.

The Office for National Statistics estimates are the first since the collection of labor disputes data was suspended in April 2020 due to the coronavirus outbreak. The agency plans to resume monthly reporting from November.