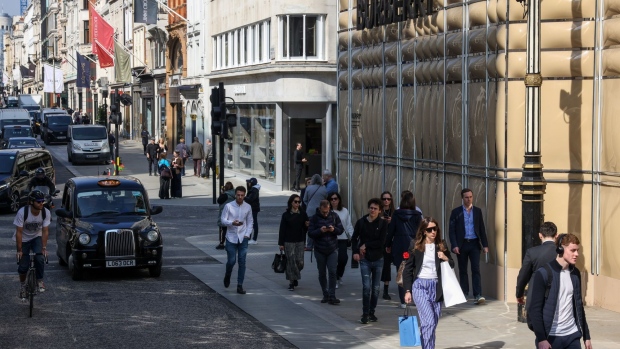 Shoppers and pedestrians pass the Burberry Group Plc story on New Bond Street in central London, U.K., on Thursday, March 24, 2022. The Office for National Statistics are due to release the latest U.K. retail sales figures on Friday. , Bloomberg

(Bloomberg) -- A group of 250 luxury UK brands, including Burberry Group Plc and Harrods Ltd, have called on the government to reintroduce tax-free shopping for tourists as a way to boost the economy.

Scrapping tax from purchases will trigger an extra £1.2 billion ($1.5 billion) in annual retail sales and attract an additional 600,000 visitors to the country, according to Walpole, a group representing the UK luxury industry. The UK is the only European nation not to offer this perk to tourists from outside the European Union.

“If the UK is to be restored as the world’s number one luxury destination, then it’s clear we need a coherent strategy and policy changes to get us there,” Walpole Chief Executive Officer Helen Brocklebank said in report released Monday.

Before the pandemic, tourism contributed 4% of Britain’s economy and had an overall value of £85 billion, benefiting companies such as Dufry AG, a Swiss company that’s the world’s largest operator of duty-free shops. More than a third of that money was generated by sales to high-end tourists staying in luxury accommodation such as five-star hotels.

Those visitors, who typically spent 14 times more than the average tourist, are now favoring boutiques in cities like Paris, Madrid and Milan. That’s largely because of the UK’s decision to abolish tax-free shopping in 2020, the report said.

Before that happened, 69% of travelers to the UK said their decision to visit was influenced by the opportunity of tax-free shopping. Since then, spending by US visitors to the EU has climbed to 91% of pre-pandemic levels, while only reaching 49% in the UK.