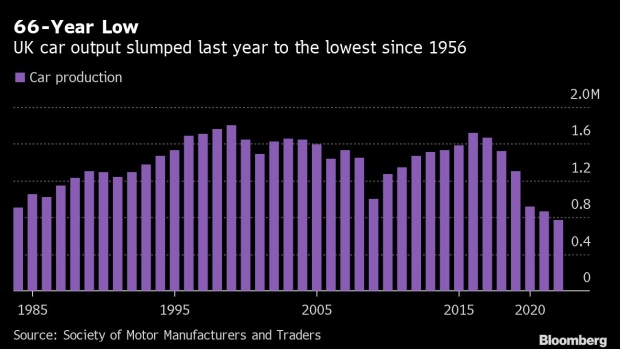 (Bloomberg) -- Automakers had their worst year in the UK in more than six decades after the global semiconductor shortage and the closing of key factories hammered output.

Production fell 9.8% to around 775,000 cars in 2022, the fewest since 1956 and well below pre-pandemic levels, the Society of Motor Manufacturers and Traders said Thursday.

The trade group sees a rebound to 842,200 units this year as components bottlenecks ease and automakers from Stellantis NV to Nissan Motor Co. start retooling their local factories to make electric vehicles. Still, the UK is a step behind other carmaking nations including Germany, which already returned to production growth last year.

“Why are we down as low as we are? Most of it is to do with supply chain shortages, but the UK is worse affected than many of our counterparts because you’ve got some structural changes,” said Mike Hawes, SMMT’s chief executive officer.

BMW AG in October said it will shift production of electric Mini hatchbacks from Oxford to China. Honda Motor Co. shuttered its Swindon site that made Civic hatchbacks in mid-2021. Stellantis stopped making Vauxhalls at its Ellesmere Port factory last year — but at least that plant is being overhauled to make electric vans.

Battery-powered vehicles were a rare bright spot. Their output rose around 5% last year and the value of fully electric, plug-in hybrid and hybrid models exported has jumped sevenfold since 2017 to more than £10 billion ($12.3 billion).

Volkswagen AG-owned Bentley is spending £2.5 billion over the coming decade to electrify its lineup and modernize its factory in Crewe. Nissan has committed to making battery cars at its Sunderland plant, creating 1,650 jobs.

Still, this month’s failure of Britishvolt Ltd. — formerly the UK’s main hope for a homegrown battery giant — casts further doubt on the country’s prospects in the global race to become self-sufficient in greener technology.

The latest threat has cropped up in the US, where President Joe Biden is luring EV suppliers with $370 billion worth of clean-technology subsidies in the Inflation Reduction Act.

The US aid package “clearly has the potential to suck up investment,” Hawes said. “Our question is how is the UK going to react.”