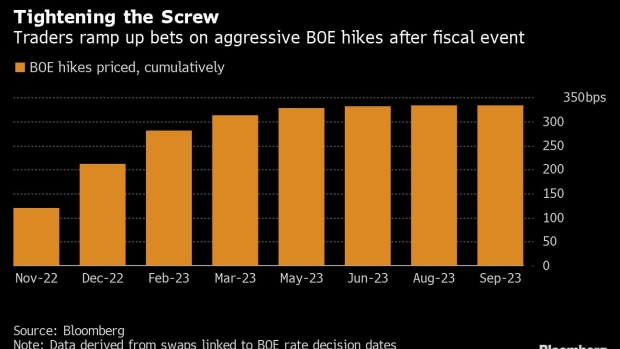 (Bloomberg) -- The market mayhem that followed Chancellor of the Exchequer Kwasi Kwarteng’s fiscal statement has sparked talk of a possible emergency Bank of England action to calm the turmoil.

As the pound and gilts plunged on Friday, George Saravelos, global head of foreign-exchange research at Deutsche Bank AG, said the bank needed to unleash a sizable interest-rate hike as soon as next week to restore credibility in the wake of the “historical drops.”

Amid the rout, traders fully priced 120 basis points of additional rate hikes from the BOE by its Nov. 3 meeting -- more than double the size of the move announced on Thursday that took rates to 2.25%. Traders are also now pricing in the possibility of an intra-meeting hike in the swaps market, according to Trevor Pugh, head of gilt interdealer broker and agency desks at Tradition Ltd.

“The fall in the pound in the FX markets is starting to raise the question of the Bank acting more aggressively, perhaps even intra-meeting,” he said, adding that while an inter-meeting hike to fight an inflation crisis may look “panicky,” it is a possibility in a potential currency crisis.

While emergency rate cuts were seen during the pandemic and financial crisis, hiking rates outside of a normal schedule would be unprecedented since the bank gained independence. That makes such action from the BOE still far from many analysts’ base-case scenario.

The BOE has been under mounting pressure to keep up with the blistering pace set by other central banks around the world to protect sterling. Still, such a move could make the sell off even worse by stoking the sense of turmoil. It would likely recall memories of the bank’s action almost exactly 30 years ago on Black Wednesday when the government and BOE unsuccessfully battled to keep the currency in Europe’s Exchange Rate Mechanism.

In the wake of Kwarteng’s statement -- which introduced widespread tax cuts that will increase government borrowing -- the pound crashed below $1.09 for the first time since 1985, sliding as much as 3.7% in addition to declines earlier in the week. Borrowing costs on five-year government bonds jumped more than 50 basis points, the most on record for a single day in Bloomberg data going back to 1992.

“The market is giving very strong signals that it is no longer willing to fund the UK’s external deficit position at the current configuration of UK real yields and exchange rate,” Saravelos wrote in a note, adding the view is his own, rather then the view of Deutsche Bank economists. “The policy response required to what is going on is clear: a large, inter-meeting rate hike from the Bank of England as soon as next week to regain credibility with the market.”

Saravelos also called for a “strong signal” from the bank that it’s “willing to do ‘whatever it takes’ to bring inflation down quickly and real yield into positive territory.”

While an inter-meeting hike is not on the cards for most, there’s still the risk of more aggressive tightening. The BOE said Thursday it would “respond forcefully as necessary” if price pressures look more persistent, and stressed it was alive to risks stemming from higher demand.

Money market wagers imply that the UK’s key rate will peak at over 5.5% in the second half of 2023. Three BOE officials who pushed for a bigger, 75 basis-point hike, argued that incoming fiscal support would stoke further price pressures on Thursday.

Prior to the BOE’s meeting, some analysts had questioned whether the bank should adjust or delay the start of its active gilt sales program, in order to avoid overwhelming the market with supply. Officials voted to commence sales of £10 billion per quarter at this week’s rate decision.

Canceling the bank’s bond sales plan would be counter-productive, Saravelos said, and “lead the central bank dangerously close to a path of fiscal dominance: a situation where decisions by the fiscal authority (large fiscal spending) and their consequences (higher yields), dominate over the central bank’s primary inflation objective.”