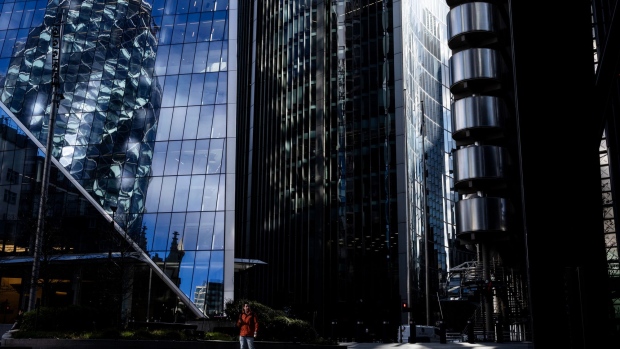 (Bloomberg) -- Investors are starting to dip back into UK assets after a historic bond selloff and a collapse in the pound to record lows.

Eric Lonergan, a portfolio manager at M&G Plc, said he’s inclined to take a small long position in gilts, with a view to increasing exposure later. In a sign others joined him as market panic eases and the pound recovers, two-year bonds rallied to send yields heading for the largest drop since 2009.

The rebound follows a selloff that wiped out more than £80 billion ($86 billion) in value from a UK government bond index in just two days, sparked by new Chancellor of the Exchequer Kwasi Kwarteng’s fiscal plans. The moves looked outsized compared to the economic risk for Lonergan.

“This is looking like panic rather than a considered assessment of the future path of UK interest rates,” he said in an interview Monday. “Gilts at these levels are starting to look quite attractive now.”

Two-year gilt yields dropped as much as 37 basis points on Tuesday, still less than half their 1 percentage-point two-day surge. Investors can pick up yields above 4% for the first time since the financial crisis in 2008.

The volatility nevertheless underscores the market’s vulnerability to another shift in sentiment. Traders are watching out for comments from the Bank of England as the recovery is partly based on bets for aggressive rate hikes to counter the inflationary impact of Kwarteng’s tax cuts.

UK Markets Have Lost $500 Billion Since Truss Took Over

Money markets are pricing in around 155 basis points by the next BOE meeting in November, with some speculation on the chance of an emergency move in the coming week. That’s helped the pound recover Tuesday to above $1.08, about 4.5% higher than a record low hit Monday.

The UK’s FTSE 350 Index edged up after declining in the past three sessions, though stocks most exposed to the UK economy such as homebuilders and banks remain weak. Given the depleted valuations and the pound’s plummet, some investors expect potential added interest in British companies from foreign bidders.

While markets may be experiencing a reprieve, traders see no end to choppy price action. The cost of hedging swings in the pound against the dollar overnight has spiked to the highest since the pandemic struck in March 2020.

“We’re hesitant to read too much into the moves in terms of investor confidence returning,” said Simon Harvey, head of currency analysis at Monex Europe, adding there were signs of profit taking on positions.

One source of uncertainty is whether policy makers make any further verbal interventions in the market. The BOE pledged to change interest rates “by as much as needed” on Monday in an attempt to calm market nerves, and is monitoring developments in financial markets “very closely,” Governor Andrew Bailey said. The BOE’s Chief Economist Huw Pill is due to speak later on Tuesday.

Bailey said policy makers would address the market moves at their next scheduled rate decision in November. BOE action or a policy reversal by the UK government may be the only way to stem currency and record bond-market volatility, according to Tanvir Sandhu, chief global derivatives strategist at Bloomberg Intelligence.

Yet there are no good options for the BOE, according to Elsa Lignos, head of currency strategy at RBC Capital Markets. It’s not clear a hike will deliver the desired effect if not sufficiently large, and could be painted as the bank “panicking” if too big, while no emergency hike would disappoint market expectations.

A delay in policy response “leaves sterling vulnerable,” said Chris Turner, a currency strategist at ING Groep NV, who sees it likely that the pound could re-test its record-low $1.0350 level over the next month. “UK markets will now be hyper-sensitive to any communication from UK policy makers.”