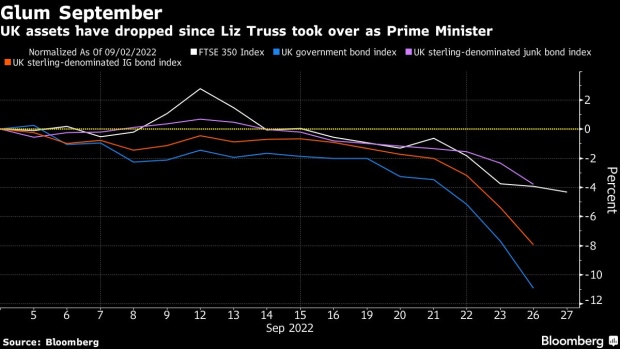 The UK’s stock and bond markets have lost at least $500 billion in combined value since Liz Truss took over as Prime Minister, with investor confidence shattered by a shock tax-cutting budget.

Taking the helm at a time when the UK economy was already grappling with the specter of recession, the Truss government’s new fiscal policies fueled concerns that inflation and borrowing would surge at a time of rapidly rising interest rates. That triggered a cross-asset selloff so severe that it sent the pound to a record low and sparked chatter about emergency action by the Bank of England.

“Confidence in the UK has been sideswiped amid a pile-on of worries about the economic outlook and the direction of travel being taken by the Truss administration,” said Susannah Streeter, senior analyst at Hargreaves Lansdown. “Only a U-turn in the slash-and-spend policies is likely to significantly restore optimism, but the administration is digging in its heels.”

The FTSE 350 Index -- which comprises stocks in the export-heavy FTSE 100 and the domestically focused FTSE 250 -- has now lost more than $300 billion in market capitalization since Sept. 5, when Truss was confirmed leader of the Conservative Party. In that time, a UK government bond index has lost over £160 billion ($173 billion) in market value, according to data compiled by Bloomberg. The rate on 10-year government bonds has risen by over one percentage point to surpass 4% for the first time since 2010.

“What the UK government has done is said, ‘to hell with the inflation outlook, let’s just think about growth’,” said Seema Shah, chief strategist at Principal Global Investors. “Bond yields are only going to go higher and undo a lot of that positive economic movement from the tax cuts,” she said in an interview.

Sterling-denominated, investment-grade bonds have also lost $29 billion over the same time, dragging down the market value of a Bloomberg index that tracks the securities to the lowest level since March 2016. A gauge of sterling-denominated junk bonds -- of which British companies account for more than 90% -- has seen its market value drop by $1.4 billion.

To be sure, with bond holders more likely to buy and hold until maturity, the selloff in bonds is relatively smaller when compared to other assets. On Tuesday, UK bonds had recovered some ground and the pound was headed for its biggest rally in months.

For stocks, the measures put at risk the FTSE 100’s outperformance this year, which has been reinforced by its exporter-heavy members. The index is down about 5% so far in 2022, compared with about a 20% slump in the Stoxx 600 Index, but its lead has narrowed in September.

“Far from being the safe pair of hands investors have been used to, the UK seems more like the wild west at the moment,” said Danni Hewson, a financial analyst at AJ Bell.