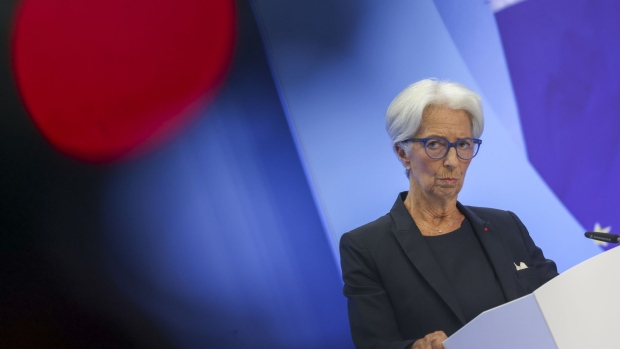 Christine Lagarde, president of the European Central Bank (ECB), during a news conference in Frankfurt, Germany, on Thursday, July 21, 2022. The ECB raised its key interest rate by 50 basis points, the first increase in 11 years and the biggest since 2000 as it confronts surging inflation even as recession risks mount. , Bloomberg

(Bloomberg) -- If European governments aren’t convinced by warnings from European Central Bank President Christine Lagarde that excessive fiscal stimulus can cause serious damage, she might invite them to consider the UK.

As governments across the euro area prepare for a brutal winter of energy shortages, Lagarde has been urging them to focus financial support on the most vulnerable families. But the bloc’s biggest economies have instead preferred broad-based measures that hold down bills for everyone.

Lagarde told lawmakers in Brussels Monday that at most 20% of what’s been agreed meets her criteria. “Work needs to be done on that,” she said. Since then, the UK has shown how fiscal policy can go wrong.

The week following Prime Minister Liz Truss’s administration announced the biggest package of unfunded tax cuts in half a century took British financial markets on a wild ride and the economy may not be far behind: The pound crashed to a record low against the dollar and then rebounded after the Bank of England intervened in the gilt market to prevent a collapse. Traders, meanwhile, priced in steeper interest-rate increases to offset the inflationary pressures, adding to the risks of recession.

“It’s perfectly alright to help people through the worst of the energy crisis with targeted support -- as long as you don’t jeopardize the country’s long-term fiscal health,” said Gilles Moec, chief economist at AXA Investment Managers.

UK Chancellor of the Exchequer Kwasi Kwarteng argued that supply-side reforms to boost economic growth meant that his tax cuts would pay for themselves within five years. But he’d sidelined the UK budget watchdog and investors weren’t convinced by his projections.

“You won’t fool the market with a growth dividend,” Moec added.

Inflation in the euro area accelerated to 10% in September, and policymakers are starting to rally around another jumbo hike of 75 basis points at the Governing Council’s October meeting. Markets currently see rates at around 3% in a year’s time -- though any big fiscal initiatives can easily push up those bets.

Lagarde argued that too much fiscal support to too many will make it even harder for the ECB to get inflation under control.

“Measures that are wide across the board without distinction between the beneficiaries that are in dire need of support and those who are not, those measures are certainly not helping monetary policy,” she said. “They can produce an upward level on prices which would work counter the monetary policy effort that we are developing.”