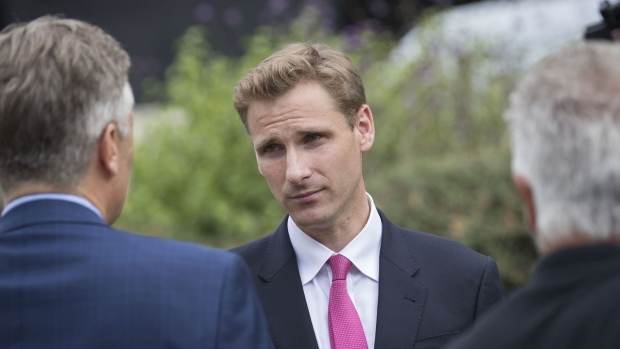 (Bloomberg) -- The UK’s digital minister reiterated the government’s ambition to make Britain a global crypto hub while sounding a cautious note about the potential criminal uses of digital assets.

“We do intend the United Kingdom and London to be crypto centers,” Chris Philp said in an interview with Bloomberg Radio on Wednesday. “But of course we’ve got to do that in a way that protects the public and in particular pays attention to issues concerning for example money laundering, and making sure that crypto is not used as a way to circumvent things like sanctions.”

The UK Treasury in April announced plans to make the country a global crypto hub, soothing an industry that had sparred with the financial regulator over what it considered to be overly strict guardrails. Retail investors in the UK are barred from using crypto derivatives, and authorities are imposing tougher rules on marketing.

The crypto industry has been the subject of accusations of regulatory failings and scams over the years. In April, a US regulator said Anchorage Digital Bank, a major cryptocurrency lender, failed to put in place controls to prevent money laundering and report suspicious transactions. Both the US and the EU have appointed teams dedicated to investigating and prosecuting illicit cryptocurrency schemes.

More recently, the crypto universe has wobbled under the weight of rising interest rates and a series of high-profile blowups, like last month’s collapse of the Terra blockchain. Bitcoin on Wednesday came close to falling below $20,000 for the first time since December 2020.

“The Treasury are working closely with the Bank of England, the Financial Conduct Authority and the Prudential Regulation Authority to make sure that balance is struck in the right way,” said Philp.

Philp also said the London Stock Exchange was weathering a pullback from equity markets better than the New York’s Nasdaq.

“Talking to a couple of founders and CEOs at London Tech Week on Monday, a couple of them who had listed last year in London, they said that their stock price would have been hit much harder had they been Nasdaq-listed instead of London-listed, so I think the Nasdaq has actually suffered much more than the London Stock Exchange,” Philp said.

The Nasdaq Composite Index is worth about six times as much as the UK’s All-Share Index, and Britain is considering reforms to make its bourse more competitive and stop firms listing overseas. Philp’s comments come after Bloomberg reported late Tuesday that SoftBank Group Corp. is studying an additional UK IPO for chip design firm Arm Ltd.