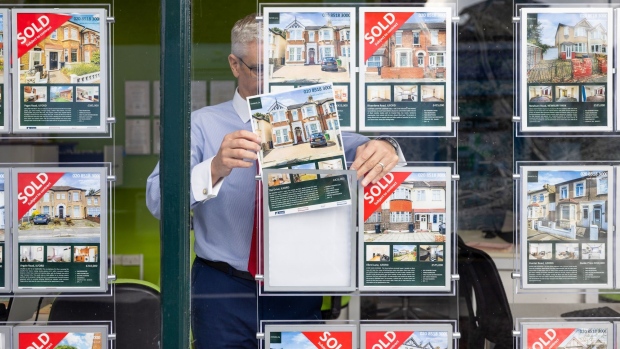 An employee places a property for sale in the window of an estate agents in London, UK, on Thursday, Oct. 13, 2022. UK estate agents turned pessimistic about the housing market, anticipating prices will decline over the next year for the first time since the start of the coronavirus pandemic. , Bloomberg

(Bloomberg) -- UK mortgage approvals fell to the lowest since the early stage of the pandemic as rising interest rates dampened demand for property.

Banks and building societies authorized 58,997 home loans in October, the fewest since June 2020 and down from 65,967 in September, according to data released on Tuesday by the Bank of England. The drop was larger than economists expected.

Despite easing from highs seen during the recent market turmoil, two- and five-year fixed rate mortgages still hover around 6%. That’s tightening the squeeze for millions stung by rising costs elsewhere.

The BOE figures show the average rate on new mortgage loans increased by 25 basis points in October to 3.09%, the highest level in records going back to January 2016.

Forecasts for property prices have already turned negative. Earlier this month, the Office for Budget Responsibility said it expects values to lose 9% over the next two years, with the average rate on outstanding mortgage stock remaining near 5% until at least 2028.

Prices are already being negotiated down -- over one in 10 homes for sale since September knocked more than 5% off their asking price, according to property portal Zoopla.

Households also remained reticent about taking on unsecured debt in October. Consumer credit rose marginally to 769 million pounds, below the previous six-month average of £1.3 billion. The figure was evenly split between credit card borrowing and other forms of credit such as personal loans and car finance.

The figures may partly reflect both distress borrowing by struggling households and pent-up following the closure of stores for Queen Elizabeth II’s funeral in September.

Households deposited an extra £6.2 billion with banks and building societies following £8.1 billion in September, suggesting many people are saving money amid fears about the economic outlook. Flows into time deposits last month were the highest on record at £11.3 billion.

Non-financial businesses repaid £7.3 billion in October, the most since June 2020, in anticipation of higher interest rates and worsening economic conditions. Small and medium-sized firms accounted for £1.8 billion of the repayment.