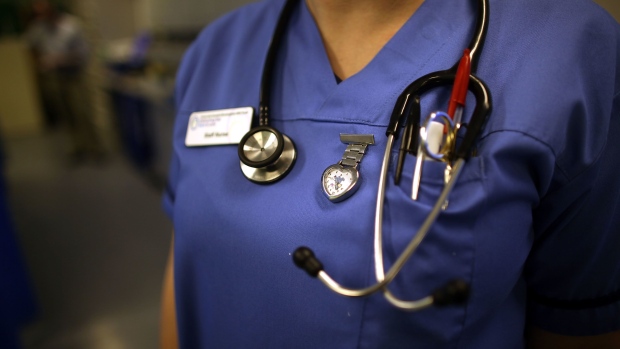 (Bloomberg) -- Nurses in the UK said they’ll strike on two days next month in an historic sign of defiance amid a dispute over pay.

The Royal College of Nursing announced Friday that walkouts would take place in England, Wales and Northern Ireland on Dec. 15 and 20, the first time that they have staged nationwide industrial action. Strike plans are currently paused in Scotland.

The government has said calls for pay rises 5% above inflation are “not affordable,” arguing that this would result in a £10 billion ($12 billion) annual cost.

Strikes are being coordinated across the health service with Unison, a labor group, currently balloting 350,000 other employees. Ballots close Nov. 25. Ambulance workers are also voting on industrial action in what could lead to their biggest walkout in over 30 years.

“My offer of formal negotiations was declined and instead ministers have chosen strike action,” said Pat Cullen, RCN general secretary and chief executive. “They have the power and the means to stop this by opening serious talks that address our dispute.”

The UK government is planning for minimum service levels to keep the National Health Service operational.

“Our priority is keeping patients safe. The NHS has tried and tested plans in place to minimize disruption and ensure emergency services continue to operate,” said Health Secretary Steve Barclay.