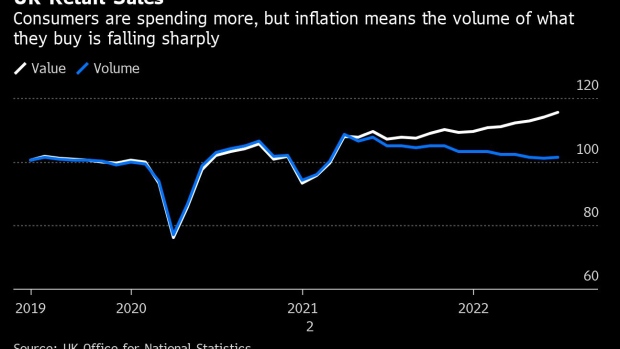 (Bloomberg) -- Britain’s surging inflation rate is forcing consumers to pay more for the same amount of goods, underscoring a dimming outlook for the economy.

Retail sales volumes unexpectedly rose 0.3% last month, but the cost of those sales increased more rapidly by 1.3%, the Office for National Statistics said Friday. The volume gains came from a 4.8% surge from web-based stores, which offered discounts and promotions to draw in customers.

The figures came hours after a separate report showed consumer confidence plunged to its lowest since 1974, when oil supply shocks triggered a wage-price spiral and left industry working only three days a week. It capped a week of official data suggesting that the UK economy is starting to buckle under the weight of falling real wages and a squeeze on the cost of living.

“The strain on the personal finances of many in the UK is alarming,” said Joe Staton, client strategy director at GfK. “Just making ends meet has become a nightmare. The crisis of confidence will only worsen with the darkening days of autumn and the colder months of winter.”

The pound fell after the reports, bringing the cumulative drop against the dollar to 12% so far this year. Yields on 10-year UK government bonds surged 9.2 basis points to 2.399%, with investors anticipating the Bank of England will continute raising interest rates sharply to fight inflation.

Internet retailers accounted for 26.3% of all retail sales in July, up slightly from the month before. Fuel sales fell 0.1% in the month, reflecting a surge in prices. Supermarkets had a small gain, but stores that don’t sell food showed a sharper drop. The gains online offset a decline in sales of clothing, household goods and second-hand items including antiques.

“The summer sunshine brought a slight uplift in sales,” said Helen Dickinson, chief executive officer of the British Retail Consortium. “Summer clothing, air conditioning appliances and outdoor foods all benefitted from record temperatures, but most retailers will still be seeing falling volumes in the face of rising inflation.”

Friday’s report follows a series of indicators that pointed to a rising risk of recession in the UK.

Real wages adjusted for inflation fell 3% in the second quarter, the sharpest pace on record. Consumer price growth broke into double digits last month for the first time since 1982.

“The monthly rise in the UK’s July retail sales masks the bigger picture of a sector facing the most testing time since the pandemic. Soaring inflation will continue to squeeze household purchasing power and likely hit sales volumes in the coming months.”

“As summer passes, and holiday credit card bills arrive, other essential costs are also spiking,” said Paul Martin, head of retail at KPMG. “Many retailers are anticipating the consequence of this is an autumn drop in demand at a time when their own margins are coming under further pressure.”

More concerning is the outlook for the labor market. New job vacancies fell for the first time since August 2020. That’s a sign that demand for workers may be cooling, which would remove the strongest pillar of the economy since the pandemic.

The Bank of England is focused on bringing inflation back to its 2% target and has signaled that further interest-rate increases are likely -- even if those curb growth. Investors anticipate a half-point increase in the benchmark lending rate to 2.25% and rates above 3.5% by the middle of next year.

Another report this morning showed that UK government borrowing came in higher than forecast in the first four months of the fiscal year as soaring inflation drove up debt costs.

A larger-than-forecast £4.9 billion ($5.8 billion) budget deficit in July took the total for 2022-23 so far to £55 billion pounds -- £3 billion more than officials forecast in March. Debt-servicing costs surged by 81% from a year earlier.

“I know that rising inflation is creating challenges for families and businesses, and it is also putting pressure on the public finances by pushing up the amount we spend on debt interest,” Chancellor of the Exchequer Nadhim Zahawi said.