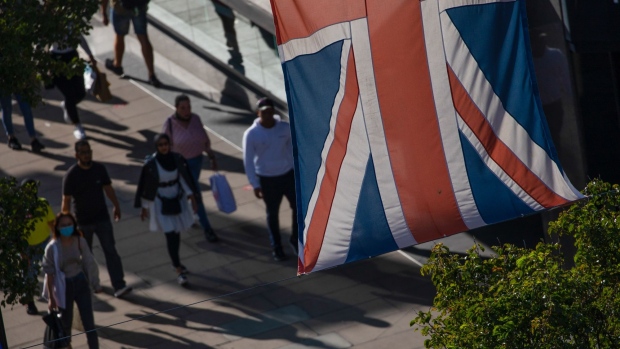 A British Union Flag, also known as a Union Jack, hangs above pedestrians walking on Oxford Street in central London, U.K., on Thursday, Sep. 17, 2020. U.K. retail sales extended their recovery in August as a government initiative to boost the hospitality industry lured locked-down Britons out to the shops. Photographer: Simon Dawson/Bloomberg , Bloomberg

(Bloomberg) -- The UK’s credit outlook was lowered to negative from stable by S&P Global Ratings because of rising risks to the country’s fiscal health over the next two years.

While the slew of tax cuts announced by the UK government last week are aimed to support economic growth, those policies risk a “substantial widening” of fiscal imbalances, raising the cost of borrowing and complicating the task of bringing inflation under control, S&P said in a statement on Friday. S&P affirmed the UK’s rating of AA, the third-highest grade.

Britain’s most radical package of tax cuts since 1972, combined with plans for large-scale borrowing, sent UK markets into a tailspin, with the pound hitting the lowest-ever level against the dollar while borrowing costs soared. The Bank of England stepped in to stave off an imminent crash in the gilt market by pledging unlimited purchases of long-dated bonds.

“The outlook revision primarily reflects what we view as rising fiscal risks for the UK economy stemming from the sizable budgetary loosening announced on Sept. 23,” according to the statement.

Nevertheless, Prime Minister Liz Truss has showed no sign of backing down, blaming Russia’s war in Ukraine for the market turmoil that pushed the pound to a record low.