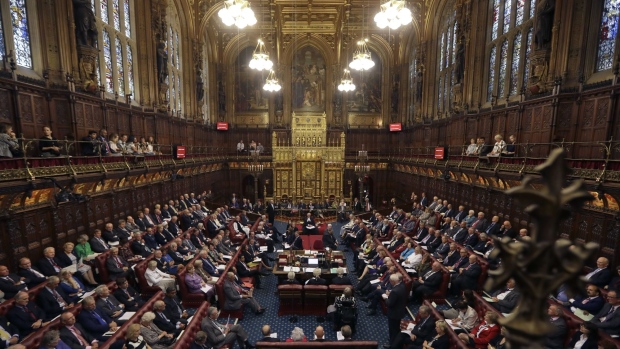 (Bloomberg) -- Britain’s financial regulators would face more scrutiny over their policies for consumers and the economy from Parliament under proposals from members of the House of Lords.

A new independent body could track progress against certain metrics, with elected officials also given more scope to probe their actions, according to suggested changes to the draft legislation that will form the blueprint for the UK’s post-Brexit financial rules.

The proposals tabled by the upper house of Britain’s parliament could reignite last year’s debate about regulators’ independence. After a series of clashes, the Treasury dropped plans to insert a power for ministers to intervene over the actions of the Prudential Regulation Authority and Financial Conduct Authority.

But several members of the House of Lords are looking at ways to increase oversight based on objective criteria. The regulators will gain new powers because of Brexit, requiring new processes for Britain’s parliament to oversee them, those lawmakers believe.

One proposal from Conservative peer George Bridges is for a new watchdog: the Office for Financial Regulatory Accountability. Regulation needs to be “robust, proportionate and consistent,” Bridges said. “I want to make sure there is a level of accountability to deliver on that.”

The new body could be similar to the Office for Budget Responsibility, created in 2010 to provide independent analysis of the UK’s public finances.

Jonathan Hill, a fellow Conservative lawmaker who carried out a review for the government on ways to modernize the UK’s listings regime, supports the creation of an independent body to hold regulators to account.

“I don’t see that as a challenge to the independence of regulators, but as something objective that would build confidence in the overall system,” Hill said.

Sharon Bowles, who sits in the House of Lords and was previously a member of the European Parliament, is also calling for extra powers for Britain’s parliament due to the complexity of financial services and their importance for Britain’s economy.

The House of Lords will begin a debate about the possible changes Wednesday. They could be added to the financial services and markets bill if they attract enough parliamentary support.

The draft legislation is due to come into force in the Spring, covering areas ranging from crypto rules to access to cash for consumers.

One of its biggest areas is setting the direction for UK after Brexit. Questions about how much freedom regulators should have to determine policy and whether they should be required to consider the UK’s international competitiveness dominated debated about the legislation last year.

“The international competitiveness of the UK’s financial services sector is dependent on our reputation for regulatory independence,” Tulip Siddiq, Labour’s shadow city minister said. “That’s why the Government should have listened to the concerns of the City and never threatened the independence of the financial services regulators in the first place.”

In the end, the Treasury did include a requirement for the PRA and FCA to consider competitiveness as a secondary objective after safety and soundness.

The scrapped call-in power was misconceived, many in parliament believed, as it awarded extra powers in a narrow way to the government. Instead, there could be wider parliamentary scrutiny and the introduction of objective standards.