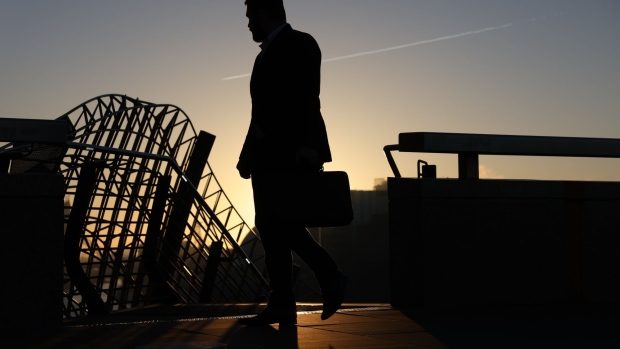 (Bloomberg) -- The pace of hiring and pay growth slowed in November as companies concerned about the UK economy tipping into recession became more reluctant to take on permanent staff, an industry survey showed.

The Recruitment & Employment Confederation said its measure of demand for permanent staff fell for a second month, with employers turning to temporary workers to fill jobs. Vacancies grew at the slowest pace in almost two years, and upward pressure on wages eased.

“While employers are moderately more cautious in the face of economic uncertainty, this is not yet a major slowdown in hiring,” said Neil Carberry, chief executive officer of REC. “We can expect to see falls from historic highs across our measures. But it is notable that pay and vacancies are still growing, although at a much lower rate.”

The figures suggest one of the tightest jobs markets in memory is starting to loosen, reducing upward pressure on inflation. The Bank of England, which has boosted interest rates eight times in the past year to prevent a wage-price spiral, is watching the labor market carefully for signs it’s fanning pressure on prices.

The availability of staff also continued to decline, with the highest concentrations in healthcare and retail sectors, suggesting supply side shortages in the labor market are far from over.

REC said that the fall in labor supply was partly driven by lower turnover in staff, as people decided to hold onto their existing jobs rather than pursuing new opportunities. There were also fewer foreign workers in the UK market.

Private sector wage growth slowed in November, both for starting salaries and temporary workers’ wages. That’s a promising sign for the Bank of England, which has urged companies to exercise wage restraint to avoid fueling inflation further.

REC said the Midlands registered the steepest up-tick in permanent starters’ salaries, and was the only area to see the rate quicken since October. The north of England saw the quickest rise in temporary pay, while the south of England recorded the lowest.

Overall, ONS data showed that employee earnings rose 6% year-on-year in the third quarter of 2022, with pay increases in private sector far outstripping the public sector. But with prices rising at nearly twice that rate, pay gains are being rapidly offset by the mounting costs of living.

“Despite the cost of living pressures that households are enduring and the industrial relations impasse within many sectors, wage growth may well be trending down in the months ahead,” said Claire Warnes, partner at KPMG UK.