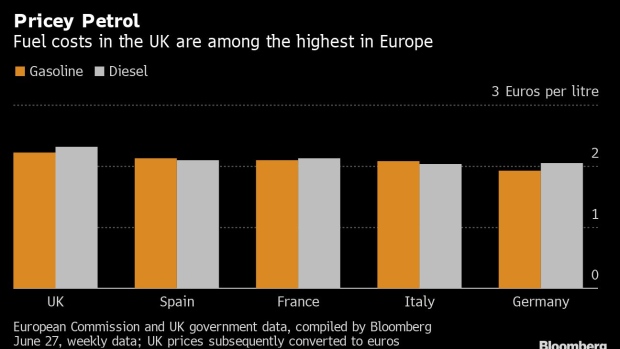 (Bloomberg) -- Petrol prices in the UK surged to another record, triggering a wave of go-slow protests on the nation’s motorways.

Petrol hit an all-time high of 191.53 pence ($2.32) a liter while diesel was just shy of its record, at 199.03 pence, according to data from the RAC motoring organization. The surge is fanning the fastest UK inflation rate in years.

The RAC said that wholesale petrol prices have now dropped for five straight weeks and questioned why there hasn’t been an accompanying decline at the pump at supermarket retailers. The UK now has the most expensive fuel of any of Europe’s five-largest economies, data compiled by Bloomberg show.

“We would love to hear their reasoning for keeping their prices so high in this instance,” said Simon Williams, a spokesman for the RAC.

FairFuelUK, a campaign group, said there were go-slows planned on several motorways to protest at the runaway prices.