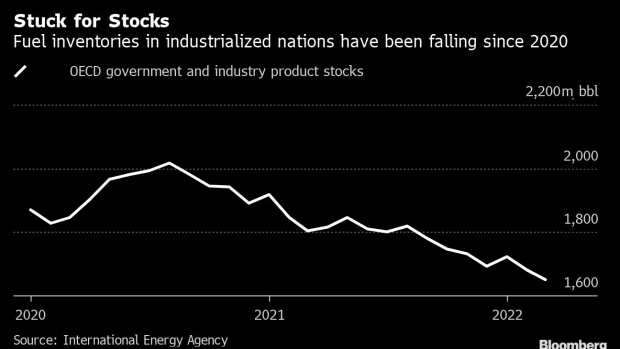 (Bloomberg) -- Oil prices might have dropped 10% in the past few weeks, but the cost of petrol and diesel at the pump in the UK keeps hitting records every day.

The relentless surge has helped to fan an annual inflation rate of 9.1%, the highest in decades.

The big global problem in the oil market right now is a bottleneck in the refining system, and it’s something that countries everywhere are having to cope with, not just the UK.

But nobody has built a large oil refinery in the UK for more than five decades and many have closed, mirroring a trend observed in Europe and other industrialized countries who’ve essentially outsourced fuel-production to Asia, the Middle East and elsewhere for decades now. Their assumption: we can just buy cargoes of fuel if we need them.

The decision to let the plants close -- in the UK alone about 1 million barrels a day, or 35%, of processing capacity has been removed from the peak -- always looked bold. Now it’s starting to seem almost complacent.

For example, in China, about a third of the country’s huge oil refinery capacity has recently been sitting idle.

That makes sense for a nation whose domestic demand has been hit by renewed lockdowns. It’s also logical because Beijing is fighting the pollution that the plants emit (and that Europe wants to avoid).

But what it means is that China isn’t dumping diesel into the local Asian markets that it could. That would, if sustained over time, affect prices here in the UK and in Europe.

China’s decision suggests the industrialized countries’ outsourcing strategies didn’t take into account that other nations might not play ball.

When Covid 19 struck, inefficient plants got permanently closed down particularly in the US and Europe, accelerating a trend that was already under way. But when demand came bouncing back, the same refineries weren’t there to make fuels.

That refining bottleneck should start to rectify itself a little this year as new facilities are built, but damage has already been done. With the UK and Europe just months from banning crude and fuel imports from Russia, there’s already an urgent need to stock up -- but few places that can fill such a large void.

Even now, months after it first invaded Ukraine, Russia remains a huge and vital supplier of crude and fuel -- especially diesel -- to continental Europe. And in trading terms, winter is only a few months away.

“The real concern in Europe is really going to be around diesel this winter,” Russel Hardy, the chief executive officer of Vitol Group, the world’s largest independent oil trader, said in a Bloomberg TV interview this week. “That’s one of the things that’s really driving price is the concern around diesel.”

The refining crunch that’s caused outsized gains in fuel prices can even be laid to some extent at the door of OPEC+ -- the coalition of oil producers led by Saudi Arabia and Russia.

When those nations cut output in the wake of slumping demand, they in turn crashed the margins that refineries make because crude prices rose faster than fuel prices. Some of the plants shut and haven’t come back, and global stockpiles of fuels have been in a downtrend as a consequence.