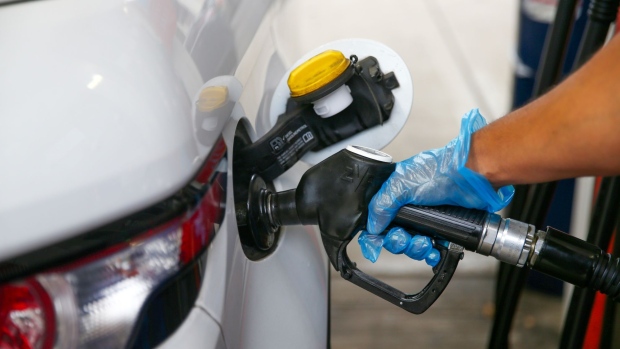 A man fills his car with petrol at a Esso petrol and refueling station in London. Photographer: Hollie Adams/Bloomberg , Bloomberg

(Bloomberg) -- The average UK gasoline price at the pump surged to a fresh record on Monday, according to the RAC motoring organization.

“The high cost of diesel is not only hard for the 12 million-plus drivers who rely on it, but also for the majority of businesses which move products or deliver services by road,” RAC fuel spokesperson Simon Williams said.

UK fuel prices have broken record after record in recent days, despite the government in March reducing fuel duty by 5 pence a liter. Russia’s invasion of Ukraine has helped to push commodity prices, including fuels, higher, fanning inflation.

“As ever-rising fuel prices are contributing to the cost-of-living crisis, we’re surely reaching a point where further intervention from the Chancellor is required to take the pressure off households and businesses,” Williams said.

Eye-watering fuel prices aren’t just a UK phenomenon. Gasoline retail costs have also recently hit record levels in the US, while in European wholesale markets, the fuel’s premium to crude oil is well above the seasonal norm.