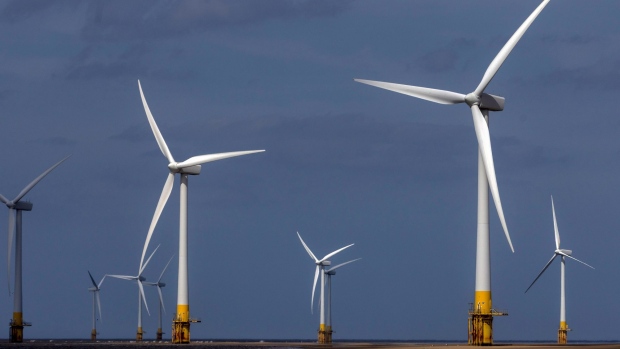 Offshore wind turbines at the Scroby Sands Wind Farm, operated by E.ON SE, near Great Yarmouth, UK, on Friday, May 13, 2022. The UK will introduce new laws for energy to enable a fast build out of renewables and nuclear power stations as set out in the government’s energy security strategy last month. , Bloomberg

(Bloomberg) -- The UK is looking to close a loophole that allows taxpayer-supported wind farms to take advantage of surging market prices when selling power to the grid.

The government plans to stop wind generators from delaying the start of their fixed-price contracts as prices rise, according to people familiar with the matter. That delay means they can charge market prices for electricity and then keep the profits instead of repaying the Treasury. It’s part of a broader effort in the UK to figure out how to stifle the impact of soaring electricity prices on British consumers. A consultation will be launched this summer.

The tactic helped spur Treasury Secretary Rishi Sunak to look at how to tax windfall profits from the power sector. The planned consultation comes as the Treasury backs away from an electricity windfall tax plan, according to a person with knowledge of the matter. The people asked not to be identified because the government plans aren’t public.

Britain has built the largest fleet of offshore wind farms outside of China based on a system known as contracts for difference. The government grants wind-power operators fixed prices to sell electricity for 15 years.

Until recently, the mechanism acted purely as a subsidy. But with the jump in power prices, existing wind farms have been paying money back to the Treasury for the first time. So far this year, offshore wind farms have paid more than 40 million pounds ($48.3 million) to Low Carbon Contracts Co. Ltd., which manages the program.

But some newly built wind farms have delayed the activation of their contracts so they can sell power at higher market prices. The government wants to find a way to prevent that from continuing.

Any changes made likely won’t have an impact for years. The government wants to close the loophole in the next auction round set for 2023. That means the measure won’t affect existing contracts or those set to be signed under the current auction round, the results of which are due to be released next week.