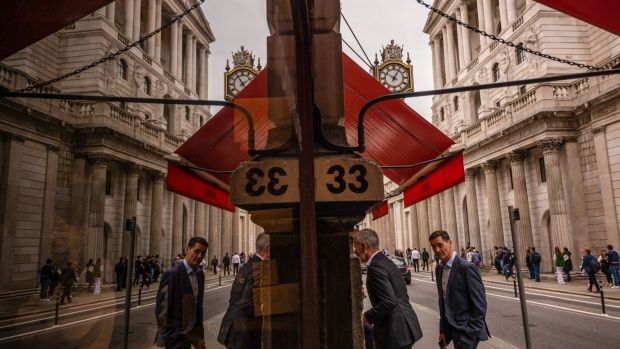 The facade of the Bank of England, right, in London, UK, on Wednesday, Sept. 21, 2022. The Bank of England on Thursday is set to raise interest rates and start selling assets built up during a decade-long stimulus program, a historic tightening of monetary policy designed to clamp down on inflation. , Bloomberg

(Bloomberg) -- The UK economy probably has already entered into recession after a drop in the value of the pound lifted inflation and made companies reluctant to invest, a survey of purchasing managers showed.

S&P Global’s composite indicator for the health of the private sector dropped to 48.4 in September from 49.6 the month before. Economists had expected a reading of 49, just below the threshold indicating a contraction.

Those figures combined with a separate report showing a record drop in consumer confidence indicate the headwinds Prime Minister Liz Truss is having to cope with. Her government on Friday will set out a package of measures to boost growth and protect consumers from a jump in the cost of electricity and natural gas.

Williamson said forward-looking indicators in S&P’s report deteriorated, indicating that a slowdown recorded earlier in the year has turned into a recession. The Bank of England on Thursday said it believes the economy shrank in the second quarter and will continue declining in the third, meeting the technical definition of a recession.

GfK Ltd., a market research company, said its measure of consumer confidence fell five points to minus 49 in September, the lowest it has recorded since the survey started in 1974.

“Consumers are buckling under the pressure of the UK’s growing cost-of-living crisis,” said Joe Stanton, client strategy director at GfK. “They are asking themselves when and how this situation will improve.”