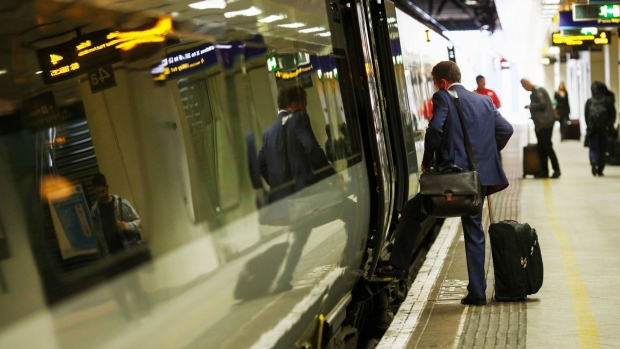 A passenger boards a train at Birmingham New Street station, operated by Network Rail Ltd., in Birmingham, U.K., on Tuesday, Oct. 4, 2016. U.K. Prime Minister Theresa May said she backs the construction of a high-speed rail line from London to northern England via Birmingham, dismissing doubts that her new government might abandon the project following the vote to leave the European Union. , Bloomberg

The firm is “cautiously optimistic” about reaching an agreement with the National Union of Rail, Maritime and Transport Workers after a week of talks since the last walkout on June 25, chief negotiator Tim Shoveller said Friday.

Meetings have been constructive, focusing on the union’s demands for job security and the savings that would be required to provide such guarantees, Shoveller said on BBC radio.

With negotiations continuing, he confirmed that Network Rail has held off from initiating a consultation process on redundancies scheduled to start on July 1, calling the move “pragmatic.” Issues around the union’s 7% pay claim “haven’t gone away,” but could be better addressed if an accord on cost cuts frees up funds, he said.

RMT’s lead negotiator, Senior Assistant General Secretary Eddie Dempsey, said there’s been a week of “intense discussions” on job security and deployment issues within the maintenance arm of Network Rail. There will now be a pause to seek feedback from members, which may take the whole of next week.

Some fundamental difficulties remain and pay hasn’t yet been discussed, he told the BBC. Had Network Rail issued the formal redundancy consultation, Dempsey would have immediately sought new strike dates, he said.

“They haven’t done that, which gives us some room to continue talking,” he said. The dispute also concerns pay, jobs guarantees and working conditions at more than a dozen train operating companies.