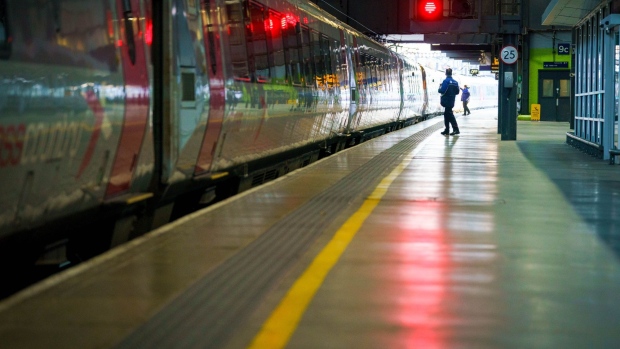 A guard signals a train to depart at Leeds railway station in Leeds, UK, on Friday, Nov. 25, 2022. The Bank of England has delayed plans to move hundreds of staff from London to Leeds, as the economic turmoil slows the government's levelling up agenda. , Bloomberg

(Bloomberg) -- Britain’s National Union of Rail, Maritime and Transport Workers has rejected an offer from the Rail Delivery Group aimed at ending a strike action planned before Christmas.

The offer proposed a pay-rise of 4% in 2022 and 2023, but the union claims it is conditional on many changes to working conditions, including job losses, reducing train staff on-board and the closure of all ticket offices.

This offer is the first in months, according to the RMT, and comes after the Department for Transport gave the Rail Delivery Group, which negotiates on behalf of rail operating companies, a mandate to make a proposal. This comes as pressure is piling on train companies with a strike action planned for 8 days in December and January as well as an overtime ban from Dec. 18 to Jan. 2 threatening mass rail disruptions.

“We have rejected this offer as it does not meet any of our criteria for securing a settlement on long term job security, a decent pay rise and protecting working conditions,” RMT general secretary Mick Lynch said. “The RDG and DfT who sets their mandate, both knew this offer would not be acceptable to RMT members.”

RMT general secretary Mick Lynch called for an “urgent” meeting with the Rail Delivery Group tomorrow to negotiate further. Network Rail also made an offer on pay and working practices which the RMT is reviewing.

Transport Secretary Mark Harper called the deal’s rejection “incredibly disappointing and unfair to the public, passengers and the rail workforce who want a deal.”

“Our railways need to modernise,” Harper said in a statement. “There’s no place for outdated working practices that rely on voluntary overtime to run a reliable 7-day service.”