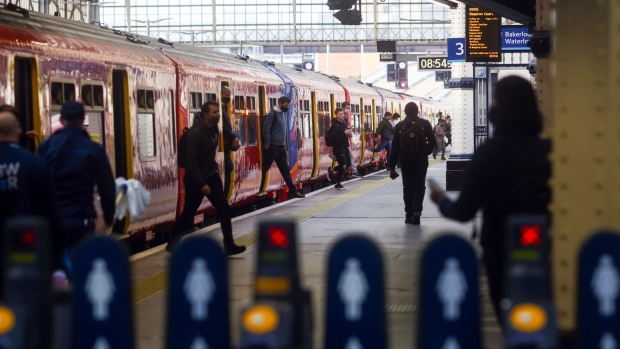 Commuters disembark a train at London Waterloo railway station in London, U.K., on Monday, Oct. 11, 2021. Two Bank of England officials moved to reinforce signals of an imminent rise in U.K. interest rates to curb inflation, with one telling households to brace for a "significantly earlier" increase than previously thought. , Bloomberg

Britain faces the threat of a national train strike causing a transport meltdown this summer after a ballot of 40,000 rail workers approved industrial action in a dispute over pay and job cuts.

Walkouts could start by the middle of next month after they were backed by almost 90% of votes, the RMT union said on its website, with more than 70% of members taking part in the poll.

The dispute concerns track operator Network Rail and 15 train operating companies, making it potentially far more disruptive than generally more limited clashes in recent years. Services could be slashed and run only in peak hours even on the busiest lines.

The clash comes as the UK government seeks savings from a rail network that it propped up with millions of pounds when passengers numbers collapsed at the height of the coronavirus crisis. Network Rail alone plans to cut 2,500 jobs, according to the RMT, which wants a guarantee of no compulsory firings together with a new pay deal as household costs spiral.

The union called the vote the biggest endorsement of strike action since Britain’s railways were privatized in the 1990s and now plans to discuss a timetable for walkouts that could start from mid-June. It urged the government to intervene to encourage employers to return to talks.