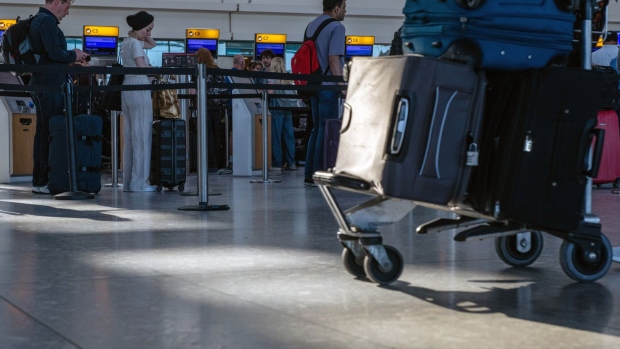 Passengers queue to check in at the departures hall of Terminal 5 at London Heathrow Airport in London, UK, on Monday, June 13, 2022. Heathrow airport said its policy of carefully matching flight availability to resources as travel rebounds has been vindicated, citing a lack of disruption even as customer numbers reached their highest level since the start of the pandemic. , Bloomberg

(Bloomberg) -- Britain’s aviation regulator delayed a decision on fee hikes at London Heathrow airport as it evaluates how a UK recession and rising interest rates are likely to impact travel demand.

An interim charge of £31.57 ($38) per passenger should be applied from February through the rest of 2023 pending a final ruling on a five-year charging structure, the Civil Aviation Authority said in a filing Thursday.

The decision met with hostility from airlines at Heathrow, which already has some of the highest fees in the world. IAG SA, owner of British Airways, the hub’s biggest operator, said next year’s levy will be 56% higher than in 2021.

Virgin Atlantic Airways Ltd., Heathrow’s No. 2 airline, said the CAA was holding back on a decision and allowing excessive charges after buying into the hub’s projections for a slow recovery in travel from the coronavirus crisis.

“It is unacceptable that the CAA has published a price cap for 2023 charges based on Heathrow’s undercooked and self-serving passenger forecasts,” Shai Weiss, the carrier’s chief executive officer, said in an emailed release.

International Air Transport Association Director General Willie Walsh, a former CEO of IAG, called the CAA’s stance “frustrating and disappointing” and said in a statement that “a correct and fair price” must be quickly established.

Spanish builder Ferrovial SA, one of Heathrow’s owners, also hit out at the regulator, saying uncertainty surrounding the airport’s ability to raise charges was “undermining our ability to commit capital to fund crucial investments.”

The CAA announced a consultation on the plans that it said will last only two weeks to allow the pricing arrangements to be confirmed as soon as possible.

(Updates with comments from IAG, IATA starting in third paragraph)