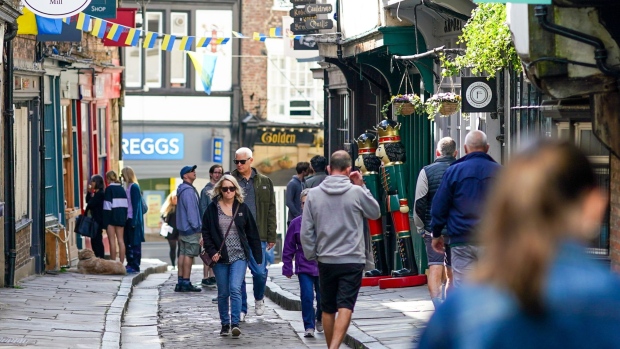 Shoppers walk along a retail street in the city centre of York, UK, on Monday, June 20, 2022. On Wednesday, inflation is set to rocket to a new 40-year high with the cost of goods leaving factories already racing ahead at a double-digit pace. , Bloomberg

The volume of goods sold in stores and online fell 0.5%, the Office for National Statistics said Friday. Economists had expected a decline of 0.7%. Sales excluding auto fuel fell 0.7%.

The fail was driven by a fall in food sales, which the ONS linked to soaring prices. Data earlier this week showed overall inflation hit 9.1% in May -- a four decade high.

“Feedback from supermarkets suggested customers were spending less on their food shop, because of the rising cost of living,” said Heather Bovill, the ONS’ deputy director for surveys and economic indicators.

A separate report from GfK earlier Friday showed consumer confidence dropped to a record low this month as surging prices, a squeeze on incomes and disruption from strikes took a toll on the national mood. Meanwhile the Confederation of British Industry said Thursday that retailers were also expecting a poor July as inflation eats away at the willingness of consumers to spend.

Taken together, the reports show the deep damage that the fastest inflation rate since the 1980s is having on the economy. With wages failing to keep pace with rising prices, consumer finances are being squeezed and leading to a more gloomy outlook than during the depths of the coronavirus pandemic.

“Britain faces a stark new economic reality,” said Joe Staton, client strategy director at GfK. “History shows that consumers will not hesitate to retrench and tighten their purse strings when the going gets tough.”