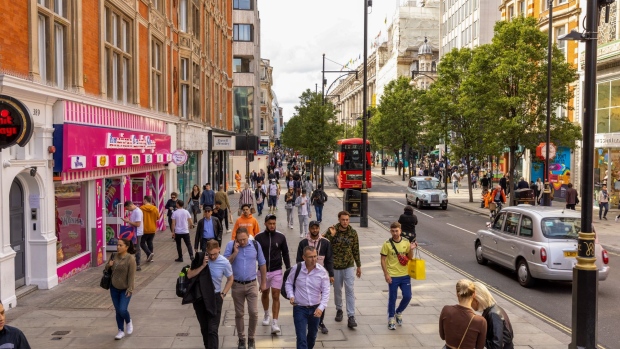 Shoppers pass the American Candy Shop on Oxford Street in central London, U.K, on Monday, Sept. 13, 2021. While the initial frenzy to return to the high street may be waning, August is likely to have seen increased spending on clothes and personal care items in preparation for more people returning to offices from September. Photographer: Jason Alden/Bloomberg , Bloomberg

(Bloomberg) -- UK retail sales unexpectedly rose in April even as consumers struggled with the fastest inflation rate in four decades.

The volume of goods sold in stores and online gained 1.4%, after falling 1.2% the previous month, the Office for National Statistics said Friday. Economists had expected a decline of 0.3%. Sales excluding auto fuel also rose 1.4%.

The increase was driven by spending on alcohol, confectionary and tobacco in supermarkets, as well as higher clothing sales online. Fuel sales also increased after a record jump in prices led to a sharp fall the previous month.

The figures cover a month where inflation jumped to 9%, the highest level since the 1980s, as millions of Britons faced eye-watering rises in their energy bills. Payroll taxes also rose.

With disposable incomes on course to fall at one of the steepest rates on record, UK consumer confidence has also taken a battering, with separate data Friday showing it has plunged to the lowest level since at least 1974.

The ONS said supermarket food sales were broadly flat, and sales of household goods fell. Lower spending on second-hand goods was also reported, including antiques and goods sold at auction.