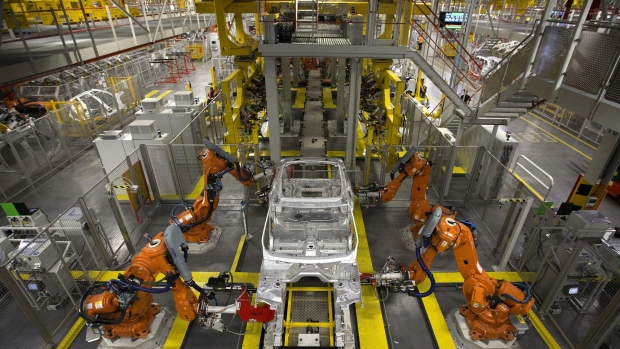 A Jaguar I-Pace electric vehicle during a Society of Motors Manufacturers and Traders summit in March 2021. Photographer: Jason Alden/Bloomberg , Bloomberg

(Bloomberg) -- Almost a decade after playing home to Europe’s first mass-produced electric car, the UK is at risk of becoming a footnote in the global auto industry’s shift to battery-powered vehicles.

The UK lacks the cell and pack factories automakers will need to support their transition away from the internal combustion engine. In what could be a fresh blow to British carmaking, the country’s top auto manufacturer, Jaguar Land Rover, is in talks with Northvolt AB and SVolt Energy Technology Co. about supplying batteries for a range of EVs it may assemble in Slovakia, according to people familiar with the matter.

Unless battery investment picks up, carmakers may only accelerate their exodus from what was once the world’s second-biggest auto manufacturing base. The last few years, the UK fell outside the top 15.

“It’s about to be too late to preserve the UK role as a major automotive producer,” said Andy Palmer, the former CEO of Aston Martin who also helped spearhead Nissan’s creation of the Leaf EV built in Sunderland, England. “Unless there’s either a carrot or a stick to incentivize battery production in the UK, it’s only a matter of time before the automobile industry here becomes a niche industry that caters to brands such as Rolls-Royce and Bentley.”

As the move to electric vehicles redraws manufacturing maps, the UK is endangered by scarce supply of raw materials, expensive energy, meager government incentives and potential Brexit-related tariffs. While the country has pumped hundreds of millions of pounds into battery-technology research, this has spurred minimal production.

To date, the UK has just one major plant in operation, owned by China’s Envision Group. The manufacturer added production of longer-range packs for Nissan Leaf EVs last year and announced plans to expand, though not until 2024 at the earliest.

A spokesperson for Jaguar Land Rover, which produced more than 220,000 vehicles in the UK last year, said the manufacturer continues to explore all options for EV battery supply, and that no decisions have been made. Representatives for Northvolt and SVolt declined to comment.

Electric vehicles pose a chicken-and-egg dilemma. Carmakers are reluctant to build new factories or retool existing ones to make EVs without a battery facility onsite or nearby. Battery manufacturers in turn are generally unwilling to invest billions of dollars to set up a plant without reliable customers within short range.

Britishvolt is among a handful of startups that have announced plans to build giant battery plants in the UK, but firm orders and manufacturer commitments are lacking. That could be a persistent obstacle, given the industry is mostly home to lower-volume luxury and sports-car brands such as McLaren, Bentley, Aston Martin and Lotus.

While Nissan Motor Co., Stellantis NV and Volkswagen AG-owned Bentley have committed to making EVs in the UK, analysts have warned much more investment is needed to protect the industry’s position. To preserve the current size of the car sector, the UK needs to increase battery capacity 45-fold to more than 90 gigawatt hours, the Green Finance Institute’s Coalition for the Decarbonisation of Road Transport said in a report this month.

“If a battery sector does not emerge in the UK, there is both the lost opportunity cost of the financial gains of batteries being captured elsewhere, and in turn a risk that the existing automotive industry in the UK could diminish through moving to co-locate with battery production,” the government-backed group said.

There have been some positive developments.

Britishvolt has broken ground on the UK’s first giant battery factory in northern England, with aims to produce 30 gigawatt-hours from the end of 2027 — enough cells for around 300,000 EV battery packs a year. It’s secured preliminary partnerships with Aston Martin, which has slated its first fully electric model for 2025, as well as Lotus.

A public-private venture between the owners of Coventry’s airport and its city council in central England, called West Midlands Gigafactory, aims to open in 2025 and eventually supply 60 gigawatt-hours per year at full capacity. But it’s unclear whether it will succeed without the support of a major carmaker.

The window to attract battery makers is narrowing, with European governments lining up big support packages that have made them more attractive for investment. EU countries have collectively pledged more than 6 billion euros ($6.3 billion) in public spending to build up the industry, an investment they say will unlock another $14 billion euros in private funds.

This month, VW said it was pushing ahead with plans for a 10 billion-euro EV battery and vehicle production hub at its Seat brand plants in Martorell and Pamplona, Spain. That followed an announcement from the alliance led by Stellantis and Mercedes-Benz Group AG that they’ll add a third battery manufacturing site, in Italy, on top of ones already planned for Germany and France.

The trade deal set up between the UK and the European Union in the wake of Brexit further complicates matters. While initially a relief to carmakers because the industry avoided a no-deal disaster, the pact clouds the path forward. By 2027, half of the parts content going into EVs and hybrids will need to be sourced locally — either from the EU or UK — to qualify for tariff-free trade.

JLR, which announced plans for Jaguar to ditch combustion engines completely by 2025, and for Land Rover to introduce electrified variants beginning a year earlier, hasn’t yet detailed its production plans. The company has a contract-manufacturing arrangement with Magna Steyr for its sole fully electric model, the Jaguar I-Pace, which is made in Austria.

“It’s not, unfortunately, a level playing field,” said Mike Hawes, chief executive officer of the Society of Motor Manufacturers and Traders, the UK’s car lobby. “Governments intervene in Europe. They intervene in America. They intervene in in Asia. So the UK government has got to make sure that, at the very least, it creates the framework for UK manufacturing to be competitive.”