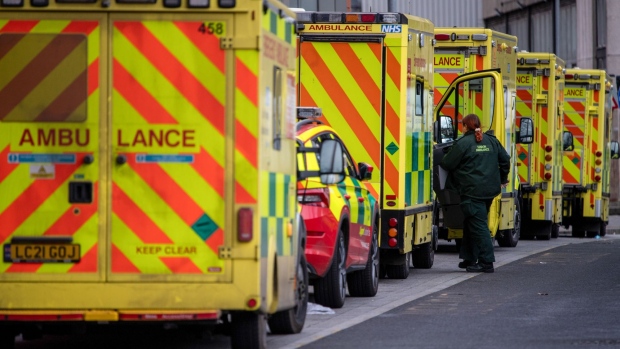 A paramedic enters an ambulance outside the Royal London Hospital in London, U.K., on Friday, Jan. 7, 2022. The U.K. sent 200 armed forces personnel into hospitals in London to help relieve staff shortages due to a surge in the omicron Covid-19 variant. Photographer: Chris J. Ratcliffe/Bloomberg , Bloomberg

(Bloomberg) -- Ambulance workers in much of England and Wales have voted to strike over pay and conditions in their biggest course of industrial action in 30 years.

In a fresh blow to the UK’s already strained National Health Service, more than 10,000 ambulance workers voted to strike as they seek a pay rise above the government’s proposed 4% offer, the GMB union said Wednesday. Workers are also blaming a lack of investment in the ambulance service for unnecessary deaths as response times soar.

London’s ambulance workers did not vote to strike, however. The east of England will also be spared the walkouts.

“Ambulance workers – like other NHS workers – are on their knees,” said Rachel Harrison, GMB National Secretary. “No one in the NHS takes strike action lightly – today shows just how desperate they are.”

Britain is beset with strikes in the run up to Christmas with rail, postal, and now health workers protesting as inflation reaches a 41-year high and erodes real incomes and living conditions. The health sector is under particular pressure as Covid-19 enters its third year and hospitals struggle with long waiting lists and packed accident and emergency departments.

Ambulance workers represented by a separate union, Unison, are also likely to strike before Christmas.

The Royal College of Nursing announced Nov. 25 that members would walk out for the first time in the union’s 106-year history over pay and conditions in England, Wales and Northern Ireland. A much larger ballot of 350,000 health workers England, Wales and Scotland by Unison is also due which could cause large disruptions in the NHS.