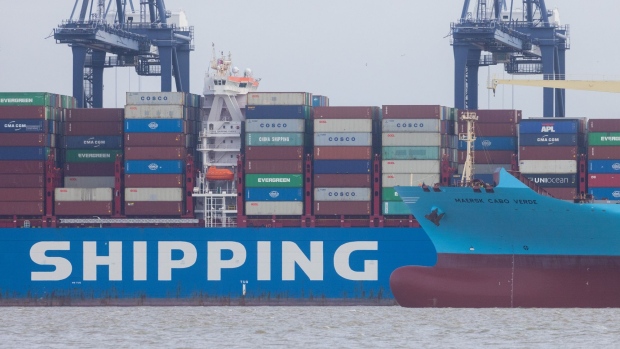 The A.P. Moller-Maersk A/S Cabo Verde container ship passing the Cosco Shipping Holdings Pisces container at the Port of Felixstowe Ltd. in Felixstowe, U.K., on Thursday, Jan. 20, 2022. The Danish carrier AP Moller-Maersk A/S has been overtaken by Mediterranean Shipping Co. in terms of capacity, according to data compiled by Alphaliner , Bloomberg

(Bloomberg) -- Almost 2,000 dock workers at Britain’s biggest container ship port plan to strike for eight days this month after failing to reach a pay deal, threatening to sever one of the UK’s most important trade routes.

Workers at Felixstowe will strike Aug. 21 to Aug. 29, the Unite union said in a statement Friday. Talks failed after the port, owned by a unit of CK Hutchison Holdings Ltd., didn’t improve its offer of a 7% pay increase, the labor group said.

Felixstowe, northeast of London, is a key hub for imports as well as some exports from the UK, and accounts for nearly half the country’s container trade. The strikes will have a “huge effect” on supply chains and cause severe disruption to international maritime trade, according to the union, which is vowing a full shutdown of the port.

If the strikes go ahead, they’ll worsen what’s been called the UK’s summer of discontent, which has already seen railway workers walk out on multiple occasions while airports and airlines reel from staffing shortages and labor woes, resulting in mass cancellations of flights.

“We are concerned about the risk of ships opting to bypass Felixstowe altogether during the strike and beyond if a backlog develop,” an FDF spokesperson said in an email. The situation could worsen if goods are re-routed to other European ports, such as Rotterdam, the spokesperson added: “This would present logistical challenges and potentially significant added costs and bureaucracy to bring those goods to the UK.”

Separately on Friday, drivers for one of London’s bus franchise operators said they would strike over pay on Aug. 19 and 20, dates that coincide with previously announced walkouts by London Underground workers.

About 1,600 drivers for London United, owned by France’s RATP, will strike after being offered a pay increase of 3.6%, the Unite union said. London United mainly operates bus routes in west and southwest London.

A shortage of truck drivers and global shipping logjams last year caused supply-chain disruptions at Felixstowe ahead of the busy Christmas shopping season, with some container ships diverted to other ports. A shutdown of the UK port due to strikes -- during one of the busiest times of the year for importers to stock up -- could have a knock-on effect for other European harbors as ships get rerouted.

Hutchison Ports UK said it was seeking a solution “that works for all parties” and that discussions were ongoing, with another meeting with the union scheduled for Aug. 8.

“The port has not had a strike since 1989 and we are disappointed that the union has served notice of industrial action while talks are ongoing,” a Hutchison spokesperson said in an email. “We understand our employees’ concerns at the rising cost of living and are determined to do all we can to help whilst continuing to invest in the port’s success.”

Almost 2,000 ships call at Felixstowe annually, with the port handling the equivalent of over 4 million containers a year, according to its website.

The UK is especially vulnerable to disruptions at container ports like Felixstowe as well as ferry services across the English Channel because it imports close to half of the food it consumes.

“This action by the union runs the risk of disrupting the delivery of vital supplies and freight, and we urge the union and port to remain at the table and agree a settlement,” the UK’s Department for Transport said in a statement. “We remain in close contact with the port on the potential impacts on port operations and supply chains.”

Some retailers are already worried about potential supply problems due to the strikes.

UK toy shop The Entertainer “almost certainly” has containers on ships that will be affected by the disruptions, according to Gary Grant, the founder and executive chairman.

“Anything that left on a boat this week from the Far East will now get caught up in that strike,” Grant said by phone. “It’s about 25 days at sea.”

The company may be able to put the goods on ships to other UK ports, but other retailers are likely to try that too. Vessels bound for Felixstowe may strike it from their routes and head for Rotterdam or other European ports, he said.

The threat to supply chains creates yet another challenge to UK companies already struggling with Brexit, the lingering effects of Covid and spiraling inflation, which the Bank of England this week warned could top 13% soon.

“Brexit, the pandemic, the war in Ukraine, and now strikes,” said Jason Webb, managing director of Electronic Temperature Instruments, a British maker of digital thermometers for the food industry. “We are jumping from one major piece of disruption to the next.”

However, the British Retail Consortium said businesses will be able to cope. “We are not overly worried -- retailers should be able to re-route goods to other container ports as necessary,” a spokesperson said. “Fresh food will be unaffected,” as most of it goes through the ferry port of Dover.

(Updates with response from FDF spokesperson in fifth paragraph.)