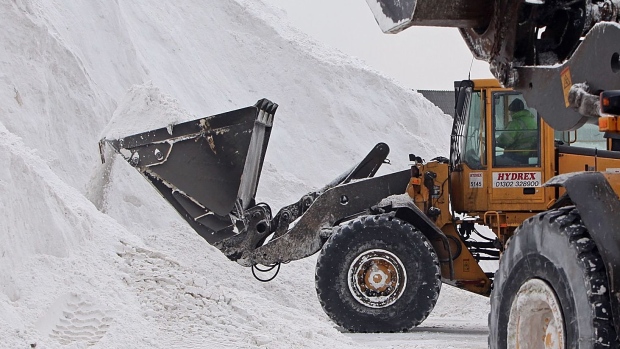 (Bloomberg) -- Compass Minerals International Inc. is exploring a sale of the UK’s biggest de-icing salt operations, according to people familiar with the matter, the latest in a flurry of mining deals.

The New York-listed essential minerals company has reached out to potential buyers for Compass Minerals UK and invited bids to be submitted in mid-July, said the people, who asked not to be identified because the discussions are private. The unit could fetch about £200 million ($243 million), the people said.

An agreement would add to a recent storm of mining deals, which are up 55% this year to $27.4 billion, led by Gold Fields Ltd.’s $7 billion all-stock deal for Canada’s Yamana Gold Inc. It would also follow the completion last year of K+S AG’s sale of its Morton Salt unit to Kissner Group for $3.2 billion.

“A sale process for our UK operations has not been announced or authorized by Compass Minerals’ board of directors,” the company said in an emailed statement. “However, we consistently review our asset portfolio in order to optimize core operations and maximize value for our shareholders.”

Compass Minerals is the largest rock salt provider in the UK, mining and operating out of Winsford, Cheshire, which was submerged in the ancient sea 200 million years ago, according to its website. Now, the company extracts rock salt from more than 150 meters below the surface and crushes and mixes it to thaw icy roads in the winter.

While a relatively small transaction, the business could draw suitors digging for recession-proof businesses because de-icing salt demand is largely dependent on weather conditions, with climate changing leading to more severe weather swings and colder winters. The allure of stable assets has also increased with this year’s stock market meltdown.

The UK divestment may attract private equity firms, as well as strategic bidders and other long-term investors, the people said. Deliberations are ongoing, and there’s no certainty they will lead to a transaction, the people said.

The sale comes at a rocky time for dealmakers, as rising inflation and the war in Ukraine weaken investor confidence. Buyout firms have been grappling with a chill in the credit markets, prompting many funds to turn to private lenders to finance acquisitions.