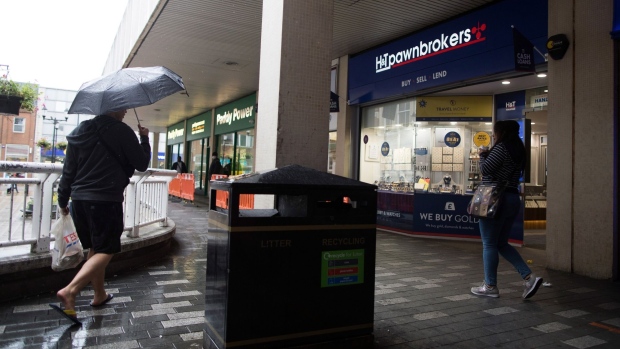 Pedestrians pass by a H&T Pawnbrokers store, operated by Harvey & Thompson Ltd., in Luton, U.K., on Wednesday, Sept. 2, 2020. The Bank of England is touting the firepower it can use to deliver more stimulus as the U.K. enters what could be a chaotic final few months of 2020. , Bloomberg

Demand for the U.K.’s largest pawnbroker hit a record as the cost of living crisis continues to bite.

H&T Group Plc said its pledge book stood at 84.2 million pounds ($102 million) at the end of June, an increase of about 75% from a year earlier, as spiraling inflation and the closure of competitors benefited the firm. Pledge lending is secured with a customer’s valuables, such as jewelry and art.

“We believe the investment case for the stock is compelling in the current environment, with the cost-of-living crisis like to support continued strong demand for pawnbroking services, while a rising gold price is helping to support demand and margins in gold purchasing,” Shore Capital analysts wrote in a note.

The poorest families in the UK are vulnerable to the cost of living crunch after almost two decades of income stagnation, the Resolution Foundation warned on Monday. Compounding the problem, household incomes are on their longest downward trend on record and things are set to get worse with inflation expected to reach double digits later this year.