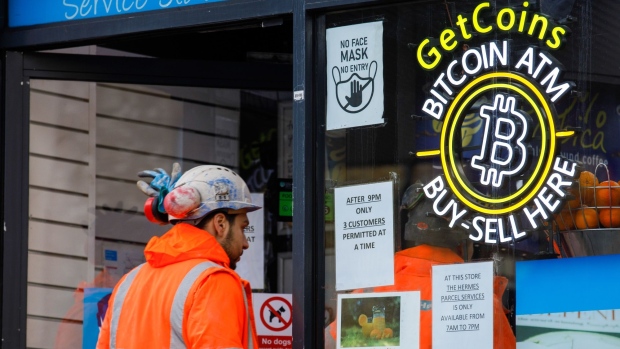 A neon sign advertising the availability of a bitcoin automated teller machine (ATM) at a Texaco petrol station in London, U.K., on Friday, Feb. 4, 2022. Getting to grips with crypto on your annual tax bill is already a tough nut to crack, but the U.K. tax authorities are about to make it even harder. , Bloomberg

Britain’s prospects as a crypto hub remain uncertain after Liz Truss won the race to be its new prime minister, leaving entrepreneurs and investors wondering what policies -- if any -- await the digital asset industry under fresh leadership.

Truss, who on Monday beat former Chancellor of the Exchequer Rishi Sunak in the contest to be Conservative Party leader, has remained tight-lipped on her plans for virtual currencies to date. Her campaign has not responded to multiple requests for comment on her future policies for digital assets.

By contrast, Sunak had emerged as a champion for crypto while he was Chancellor, unveiling a plan aimed at reviving the UK’s reputation as a leader in financial technology in April. That included a call for stablecoins to be regulated like non-banks, crypto infrastructure to be embraced and a request that the UK’s Royal Mint create its own nonfungible token.

An eagerness in government to move some of those proposals into legislation faded after Sunak resigned in July. As Truss inherits a forbidding in-tray that includes the UK’s cost-of-living crisis and potential recession, other crypto proposals are at risk of being shelved indefinitely.

“Specificity on crypto policy is key,” said Jackson Mueller, director of policy & government relations at Securrency. “Beyond several public statements, it’s not entirely clear how Ms. Truss will approach cryptoasset policy, nor what specific issues she intends to focus on.”

In the short term, Truss’s win means businesses that spent months forging relationships with Sunak and his team at the Treasury will now have to start afresh. A major question is who Truss may select for her new chancellor, a role which arguably holds the most influence over crypto as a strategic priority for the Treasury.

Read more UK’s Crypto Strategy ‘Back to Square One’ as Sunak, Glen Quit

Truss’s own silence on crypto has contributed to her status as an unknown entity for those in the industry, with little to go on bar a 2018 tweet in which she said digital assets should be welcomed “in a way that doesn’t constrain their potential”.

“Given that we have the Treasury, Bank of England and the FCA all with their own crypto agendas, it would be good to get some clarity on the direction of travel,” said Bradley Duke, co-CEO and founder at crypto exchange-traded product provider ETC Group. He said he hoped for “a clear and unified policy framework on crypto, followed by execution.”

Many crypto companies had exited the UK in recent years after failing to meet the Financial Conduct Authority’s high standards on anti-money laundering, prompting concerns that Britain was losing its place as a global leader in financial innovation.

“Despite Rishi Sunak’s ambitions for the UK to be the ‘global hub’ for crypto, it has fallen behind other centres such as Frankfurt and Zurich,” said Gilbert Hill, chief strategy officer at UK-based Pool Data, citing issues including a lack of clarity on the role of stablecoins as methods of payment. “Now there is a fresh opportunity to get on the front foot.”