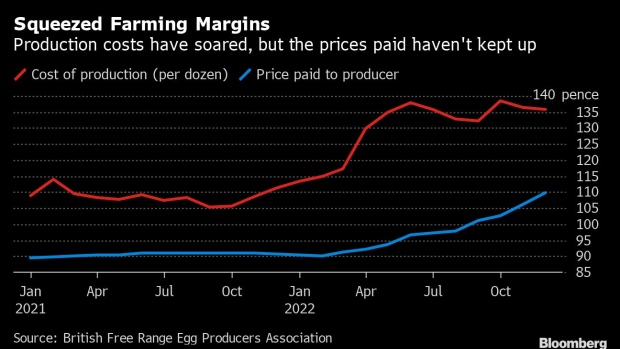 Freshly laid eggs pass along a conveyor inside an egg farm in the West Flanders region of Belgium, on Thursday, Aug. 10, 2017. The U.K. raised its estimate of eggs contaminated by the unauthorized pesticide fipronil, with the outbreak believed to have affected some products made by major supermarkets. Photographer: Jasper Juinen/Bloomberg , Bloomberg

(Bloomberg) -- In Britain, the humble egg has fallen victim to an array of disruptions that’s led to empty shelves in some stores.

Supermarkets are rationing sales, bakers are contemplating alternatives and farmers are demanding government action. Beyond the immediate impact, the crisis reveals more broadly how the structures in food markets can be easily disrupted.

For consumers, it means simple assumptions shouldn’t be taken for granted. Right now, that’s eggs readily available for breakfast. Next week or next month, it might be another staple.

“What’s been manifesting in the egg market at the moment could equally well be applied to the fruit market, or grain market, or the meat market,” said Tim Lang, emeritus professor of food policy at City, University of London. “It doesn’t take much to push a particular sector over the edge. And I think that’s what we’re seeing.”

The anxiety over eggs is hardly a British phenomenon. Russia’s invasion of Ukraine has resulted in soaring prices for grains, fertilizers and energy, key agricultural inputs.

Higher chicken feed costs have squeezed farmer margins. And on top of that, a bird flu outbreak is wreaking havoc across swathes of the US and Europe, spurring mass culling of poultry. Egg prices topped the US food inflation list last month, while in Hungary the government is capping prices.

But it’s in the UK where some supermarket shelves are empty and consumers are now fretting over supplies ahead of Christmas.

The UK has enjoyed relatively low food costs for years thanks to cutthroat competition among supermarkets. But the system is cracking under pressure from inflation, exposing a fragile relationship between retailers and their suppliers. For Lang, author of Feeding Britain, it’s a perfect illustration of how strains can appear in “just-in-time’ supply systems.

“The overall big picture I think applies to almost everything,” he said. “We’re seeing ‘just-in-time’ economics come home to roost.”

Farmers say that as costs have soared, that’s not being matched by what they’re getting for their produce. In a survey of members of the British Free Range Egg Producers Association, one third are either reducing hen flocks, or pausing or quitting egg farming all together.

“Inflation is here, sadly,” said Phill Crawley, a Leicestershire-based egg farmer and vice chair of the National Farmers Union’s poultry board. “And it wasn’t passed back through the chain. What we need as farmers is this transparency and fairness through the supply chain.”

On Monday, the NFU called for an urgent government investigation into whether to declare “exceptional market conditions” and provide aid to farmers. According to its president, Minette Batters, higher energy prices, supply-chain disruptions and the worst outbreak in bird flu on record can’t alone explain empty shelves.

Supermarkets “know they need to pay a sustainable price to egg farmers but are constrained by how much additional cost they can pass onto consumers during a cost-of-living crisis,” said Andrew Opie, director of food and sustainability at the British Retail Consortium.

The inflation squeeze may also be playing a part by forcing cash-strapped shoppers to trade down from meat to cheaper protein sources such as eggs. In addition, egg demand is usually higher over winter, particularly around Christmas.

And for agriculture, there’s often no quick fix to a supply crunch. Farmers can’t turn on another assembly line, or retool a production schedule.

--With assistance from Megan Durisin.