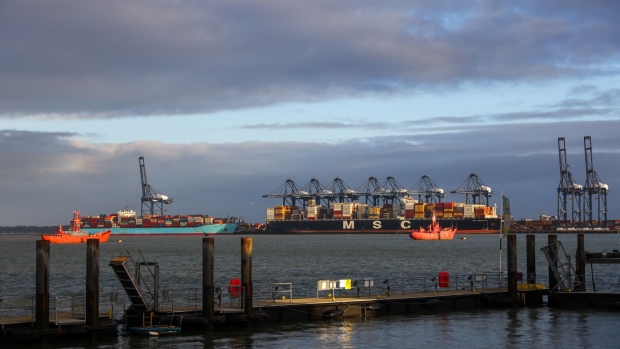 The A.P. Moller-Maersk A/S Kotka container ship, left, and the MSC Regulus container ship at the Port of Felixstowe Ltd. in Felixstowe, U.K., on Thursday, Jan. 20, 2022. The Danish carrier AP Moller-Maersk A/S has been overtaken by Mediterranean Shipping Co. in terms of capacity, according to data compiled by Alphaliner Photographer: Chris Ratcliffe/Bloomberg , Bloomberg

(Bloomberg) -- The operator of the Port of Felixstowe said that its workers’ union had rejected a request to call off an eight-day strike set to begin Sunday, threatening to severely disrupt logistics at the UK’s biggest container port.

Felixstowe, owned by a unit of CK Hutchison Holdings Ltd., said that the Unite union had failed to consult workers on its pay offer, which represents an average increase of more than 8% and almost 10% for lower-paid workers. Surging inflation has prompted unions to seek better pay deals from port operators.

“Unite has failed our employees by not consulting them on the offer and, as a result, they have been put in a position where they will lose pay by going on strike,” a spokesperson for the port said in a statement, describing the offer as fair. “The port regrets the impact this action will have on UK supply chains.”

The Port of Felixstowe said Saturday that its staff union, which includes about 500 clerical, supervisors and engineering staff, accepted a wage agreement previously agreed by Unite. The bulk of the workforce, or about 1,900 hourly workers, at Felixstowe will still go ahead with their strike.