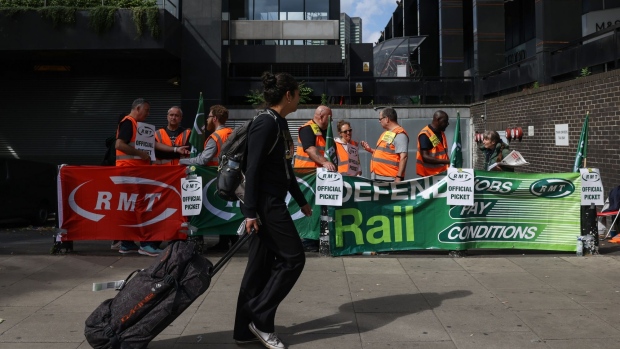 (Bloomberg) -- UK Transport Secretary Mark Harper met with labor union leaders in a bid to defuse the threat of further rail strikes in a dispute over pay and conditions.

Mick Lynch, general secretary of the National Union of Rail, Maritime and Transport Workers, described the meeting on Thursday as “positive” and said Harper had committed to writing to him later in the day to spell out what steps will be taken toward resolving the dispute.

Even so, Lynch said his union is no closer to a deal, and won’t be “until we have a reasonable offer on the table that we can put to our members.”

After six months in talks, “we need pace in these negotiations,” he told reporters in London. “I’m sure the public -- the traveling public -- and the businesses around the country and the economy want to see this dispute settled in a proper way,” he said.

Harper and Lynch are trying to find a resolution to a standoff that’s resulted in months of disruption for British rail users and threatens to bring chaos to the upcoming Christmas period.

After Britain’s railways were beset by industrial action over the summer and fall, Lynch’s RMT on Tuesday set out eight more days of stoppages in the run-up to Christmas and in the New Year, threatening widespread service cancellations at a time people typically visit relatives for the festive period.

Before the talks with Lynch, Harper told the House of Commons that he planned more such meetings in coming days.

Unions are demanding pay rises that keep place with inflation and are also protesting against plans to change working patterns in light of changing demand following the coronavirus pandemic.

But Harper told the Commons that those changes in working arrangements are needed to unlock improved offers on pay.

“We need to deliver reform, which is why I want trade union leaders to get back around the table with the employers to hammer out the detail of those reforms,” Harper said. “Then a better offer can be put on the table and we can end the need for these damaging strikes.”