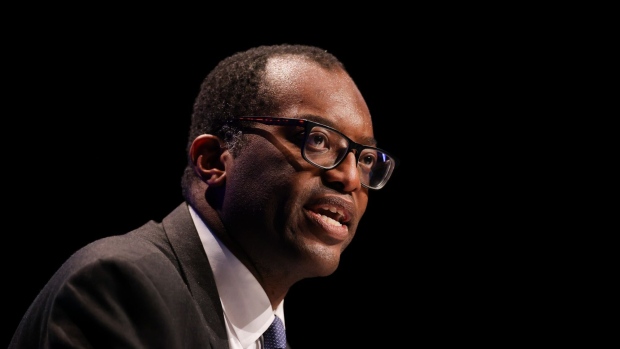 Kwasi Kwarteng, UK chancellor of the exchequer, delivers his keynote speech during the Conservative Party's annual autumn conference in Birmingham, UK, on Monday, Oct. 3, 2022. Liz Truss is standing by Kwarteng after the threat of a rebellion in the ruling party forced them into a humiliating reversal on a plan to cut taxes for the top earners in the UK. , Bloomberg

Chancellor of the Exchequer Kwasi Kwarteng is set to address restless Tory MPs next week as he and Prime Minister Liz Truss attempt to regain the trust of their party after a badly-received package of tax cuts and an unexpected U-turn exposed rifts in the UK’s ruling Tories.

Kwarteng plans to meet with backbench Members of Parliament at a gathering of the Tory Party’s influential 1922 Committee on Wednesday, according to a person familiar with the matter.

The Chancellor and premier are trying to re-establish authority over their Conservatives after triggering a market rout last month with the biggest set of unfunded tax cuts in half a century. That led to a fractious party conference this week which exposed deep divisions that ultimately forced the pair into an embarrassing U-turn on their signature tax cut for the UK’s highest earners.

On Tuesday, lawmakers will return to Parliament for the first time since Kwarteng’s fiscal statement Sept. 23. Since then, the pound touched a record low against the dollar, the Bank of England was forced to intervene in the gilt market to avoid a damaging crash, and the chancellor and Truss caved in to pressure from Tory MPs who disagreed with cutting taxes for the country’s highest earners during a cost of living crisis.

All that makes Wednesday’s meeting important, especially after Truss’s opponents, including former cabinet ministers Michael Gove and Grant Shapps, spent the party conference sounding out disgruntled MPs. Some Tories -- including senior members of Truss’s government -- continue to publicly squabble over how the government will fund its cuts, and the issue of whether to raise welfare payments in line with inflation threatens to spark another rebellion.