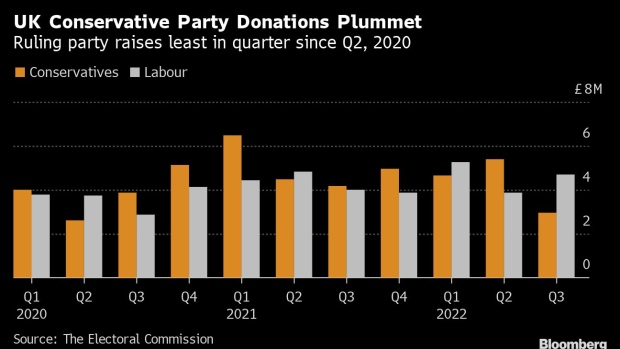 (Bloomberg) -- Keir Starmer’s Labour party is preparing an assault on the ruling Conservatives’ claim to be the UK’s natural party of business with a growth plan focused on the industries of the future following the recommendations of a former Tory minister.

Shadow Chancellor of the Exchequer Rachel Reeves on Thursday will announce that “Labour is back in business” at a conference attended by 350 company leaders, including top executives at Aviva Plc, SSE Plc and HSBC Holdings Plc, according to remarks pre-briefed by the party. The centerpiece of her pitch will be a plan to boost start-ups based on recommendations from Jim O’Neill, the former Goldman Sachs chief economist,

O’Neill’s study “provides crucial insights towards achieving one of the guiding ambitions of the next Labour government: to make Britain the best place to start, and to grow, a business,” Reeves will tell delegates.

Labour’s shadow Chief Secretary to the Treasury Pat McFadden said the party wants to strike a “partnership with business that will see better growth for the country.”

“When you’ve got such widespread industrial action, you need a better approach than going through one industry after another condemning the staff,” McFadden said in an interview with Bloomberg Television. “All of this speaks to a government that’s lost its grip.”

Labour will “not re-run the Brexit argument” despite wanting to stay in the European Union, but will “try to make the best possible future we can outside the EU,” he said. That would mean seeking recognition of professional services industries, the City and creative industries.

He accused the government of “having completely ignored the City” during the Brexit negotiations. Financial reforms expected to be announced tomorrow are being “dressed up as Brexit freedoms” when many have nothing to do with the EU.

At the Labour Party conference in September, Starmer vowed to “fight the Tories on economic growth” and “turn the UK into a growth superpower,” and the annual gathering drew scores of company executives and lobbyists. Former Tory donors are also turning to Labour, and in the third quarter, the party raised £1.7 million ($2.1 million) more than the Tories — its biggest fund-raising advantage since the last general election in 2019.

When Labour last came to power in 1997, a good relationship with business was pivotal to their success. Gordon Brown, then chancellor, held a series of meetings with executives dubbed the “prawn cocktail offensive.”

O’Neill served as a minister in David Cameron and Theresa May’s Conservative governments. His review, entitled “Start-Up, Scale-Up,” calls for greater collaboration between institutions and venture capital firms to unlock billions of pounds of extra investment, a bigger role for the British Business Bank and help to more university spin-outs prosper.

According to Labour, the proposals would:

The push to encourage new businesses also treads firmly on ground Prime Minister Rishi Sunak has sought to occupy. In a lecture while still chancellor earlier this year, he said he wanted to prioritize innovation in the British economy, and recalled his time spent studying in California “surrounded by Silicon Valley start-ups, living and breathing that entrepreneurial culture.”

But Reeves will stake Labour’s claim on the new industries, saying Britain is at a “post-Brexit crossroads.”

“We can continue down the road of managed decline, falling behind our competitors, or we can draw on bold thinking to propel us forward,” she’s due to say, adding that O’Neill’s recommendations are a first step in closing the £16 billion investment gap in high-growth firms that the UK is currently missing out on.

The proposals feed into Labour’s broader vision that policies that serve workers are good also for business. They come amid forecasts of recession and just days after the UK’s biggest business lobby, the Confederation of British Industry, accused the government of having “no plan” for growth.

“The more all political parties support the eco-system of start-ups for the UK, the more they become entwined in the DNA of policy thinking for the future,” said O’Neill, an independent peer.

--With assistance from Lizzy Burden and Anna Edwards.