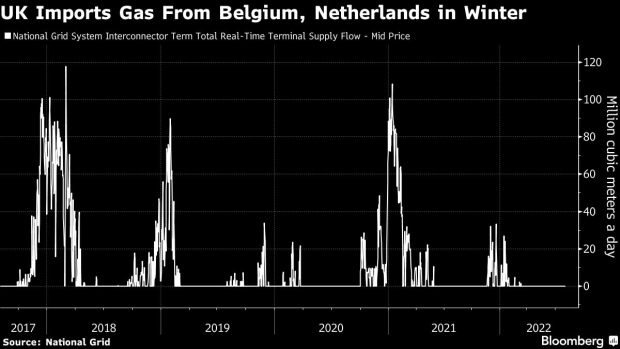 Liquefied natural gas (LNG) dispenses through pipes on-board the Gallina LNG tanker after docking at the National Grid Plc's Grain LNG plant on the Isle of Grain in Rochester, U.K., on Saturday, March 4, 2017. The shipment to England on the Gallina was priced using the U.K.'s National Balancing Point, where front-month gas cost about $7 a million British thermal units on Feb. 7. Photographer: Jason Alden/Bloomberg , Photographer: Jason Alden/Bloomberg

(Bloomberg) -- Britain’s relative immunity to natural-gas supply cuts from Russia may be about to run out.

If the winter is particularly cold, the UK may have to rely increasingly on pipeline shipments from mainland Europe -- where supplies are already thin as Moscow curbs flows amid its war in Ukraine and governments are worried about keeping their own citizens warm.

That presents a dilemma for the UK, which has very little domestic storage capacity. The nation has gradually built up a small glut of the fuel, in part because of clogged pipelines due to record gas shipments to the continent. But that will go quickly if temperatures plunge, meaning that those flows may need to be reversed. The nation will also face stiff international competition for cargoes of liquefied natural gas.

“Due to the lack of UK long-range storage, we are set to be reliant on European and LNG imports to meet our peak demand,” said Nick Campbell, a director at Inspired Plc.

The power industry in Britain has already warned consumers to prepare for a bleak winter amid a cost-of-living crisis. The country is facing its highest inflation in 40 years, driven in large part by soaring energy bills that are poised to rise even higher in the coming months.

Britain has almost zero dependency on Russian gas, but Europe’s pain in the event of further supply curbs by the Kremlin will still reverberate across the English Channel, due to interconnectivity of the markets. The availability of LNG will also largely depend on how cold it gets in Asia.

A big unknown is the amount of gas that will arrive by pipelines from Belgium and the Netherlands. In the summer, these links pump excess gas to the continent, but in the winter those flows can be reversed. Hiccups with exports sent prompt prices plunging to just a penny in June. This past winter, following Russia’s invasion of Ukraine, the price surged as high as 750 pence a therm, highlighting extreme volatility and vulnerability of the British gas market.

Consumers are mainly immune to such shocks because utilities hedge prices and use front-month benchmarks rather than spot rates. Still, next-month prices are about seven times higher than normal for this time of the year. The UK’s gas consumption can be twice as high in winter than in summer.

National Grid Plc has already warned that the country faces “knock-on impacts” such as rocketing prices if Russia cuts off gas supplies to Europe. One scenario the grid will model before winter includes how Britain would manage with no gas imports from the continent.

While it is “not unimaginable” that Belgium and the Netherlands could keep gas within their borders in case of emergency, it isn’t likely, according to Campbell. That’s because those nations would put at risk their ability to rely on Britain when they need additional gas, he said.

It’s possible Britain will keep exporting gas in the winter, especially if it’s able to receive ample supplies of LNG. Centrica Plc, the parent of British Gas, is seeking to partially restart the country’s sole large storage site, which has been closed since 2017.

The outlook for Dutch supply is brighter as the Netherlands is set to start receiving extra LNG into a new terminal next month, helping to double the nation’s import capacity.

In Belgium, there is abundant import infrastructure, but there are limits as to how much gas can flow onwards to assist Germany. That means some gas may still be available to come to the UK, said Mike Fulwood, a senior research fellow at the Oxford Institute for Energy Studies.

Last winter, reliance on pipeline supply from mainland Europe was lower than in prior heating seasons amid largely mild weather.

“If the UK imports LNG as it did last winter, then the UK shouldn’t have too much of a problem unless winter is cold,” he said. “This does rely on LNG being available for Europe though.”