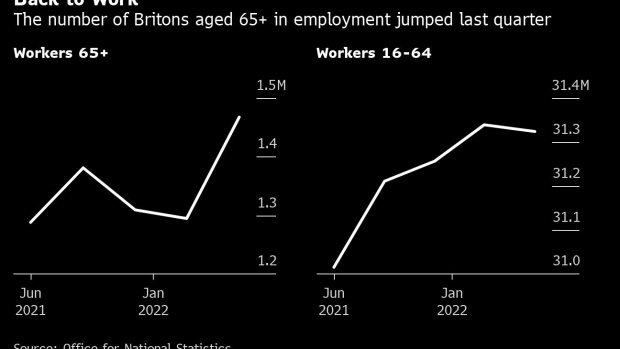 An elderly man walks towards the indoor market in the town of Darlington, UK, on Friday, May 6, 2022. Darlington has emerged as the poster child for the government’s flagship plan to increase regional prosperity, but some locals are skeptical. Photographer: Mary Turner/Bloomberg , Bloomberg

(Bloomberg) -- Older Britons are coming back to the labor market as the cost of living crisis forces them to rethink retirement plans.

The number of employed people age 65 and over jumped by 173,000 to 1.47 million in the three months through June, government figures published Tuesday showed. The increase drove job creation during the period, with employment among 16 to 64-year-olds falling by almost 14,000.

“High inflation rates may have caused some older workers to return to work as their finances become stretched by higher prices,” said Jake Finney, an economist at PwC. “In addition to this, rising state pension ages may have incentivized older workers to remain in the labor market for longer.”

Almost 12% of the 65+ population were in employment, up sharply from 10.5% in the first quarter and the highest figure since records began in 1992.

A similar trend of people working into later life was seen after the 2008 financial crisis, when falling stock markets hit the value of retirement savings.

Inactivity in the age group -- those neither in a job nor looking for one -- plunged by more than 167,000 to the lowest level since late 2020. There was also a small rise in unemployment, indicating not all job hunters were successful.