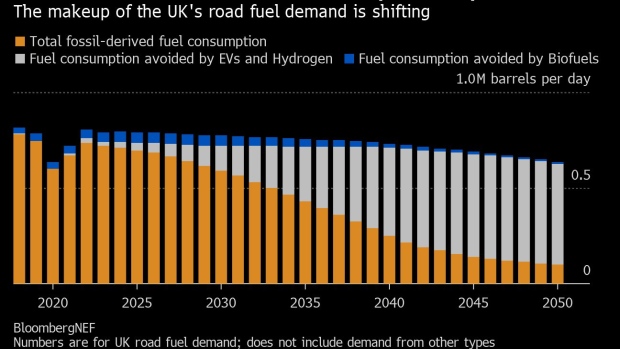 (Bloomberg) -- Surging electric vehicle sales are helping to darken the outlook for road fuel demand in the UK.

While the nation’s automakers reported their worst overall sales year in three decades in 2022, electric vehicles bucked the trend with shipments surging 40% from a year earlier. That drove up their share of the nation’s new-car market to 17% from 12%, data from the Society of Motor Manufacturers and Traders show.

Electric vehicle adoption is increasingly eating into road fuel demand around the world, offering hope of cleaner air and curtailed carbon emissions. UK petrol and diesel prices were the most volatile on record last year, according to a study by the UK Competition and Markets Authority.

A mix of fuel efficiency gains and growth in electric vehicle sales, will erode global oil consumption growth this year by about 870,000 barrels a day — slightly less than 1% of worldwide demand — according to estimates from the International Energy Agency in Paris.

Peak Gasoline Will Bring US Price Shocks and Inflation Headaches

The surge in battery-powered car sales saw them overtake diesel for the first time and now ranking second only to gasoline.

Road fuel sales in the UK and many other countries recovered last year as economies fired up again following the Covid 19 pandemic.

Even so, excluding 2021 and 2020 sales when figures were distorted by the virus, average monthly petrol sales were the lowest since at least 1990, according to government data and estimates up to September.

Diesel sales, which had been trending higher until 2018, averaged 2.42 billion liters a month up to September last year, the lowest for the corresponding periods — excluding the pandemic years — since 2015.