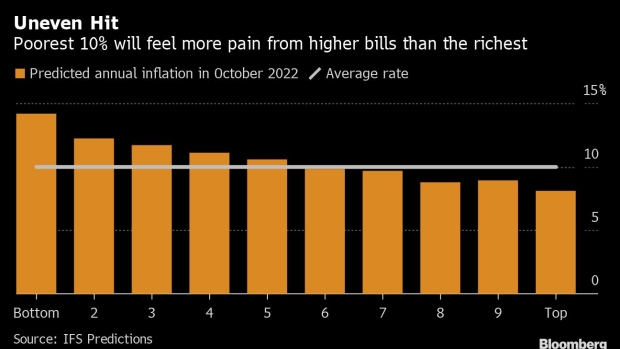 The poorest people in Britain will see a 14% increase in their own personal rate of inflation later this year, almost double the pace experience by the richest in the country.

That’s the conclusion of the Institute for Fiscal Studies, which will add to pressure on Chancellor of the Exchequer Rishi Sunak to extend more aid to households.

UK consumers are facing a record squeeze on living standards because of rising costs across the economy, and that will intensify later this year when energy bills are allowed to jump again.

Those increases hit the poor hardest since they spend a greater chunk of their incomes on fuel. Natural gas and electricity bills rose 54% in April and are likely to surge another 42% on average in October, the regulator Ofgem said on Tuesday.

The jump is “likely to further widen the gap between rates of inflation faced by the poorest and richest households,” said Heidi Karjalainen, research economist at the IFS.

While that will drive inflation well into double digits for the poorest households, the richest will see a rate of 8%, the IFS said.

Ofgem said the typical energy bill will spike another £800 ($1,000) a year in October, worsening a cost of living crisis that is already the worse in generations. The IFS analysis is underpinned by the Bank of England’s assumption that headline inflation will exceed 10% later this year.

To address the crunch, Sunak is set to announce a multi-billion-pound financial package on extra support on Thursday, Sky News reported Tuesday, without citing a source.