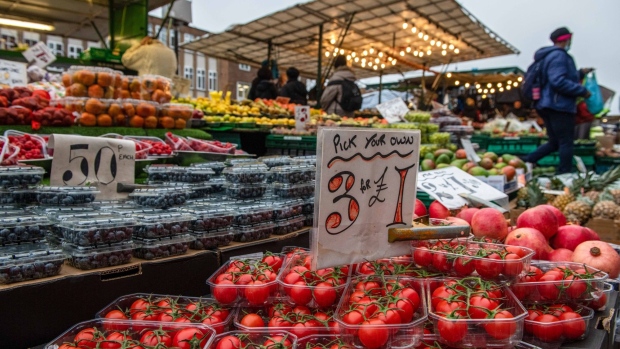 Fruit and vegetables for sale at an independent greengrocer's market stall in London, UK, on Tuesday, Nov. 29, 2022. UK retailers are cutting jobs and scaling back investment in response to mounting economic gloom, according to the Confederation of British Industry. Photographer: Chris J. Ratcliffe/Bloomberg , Bloomberg

The British Retail Consortium said the value of spending in shops open more than a year rose at an annual pace of 4.1% last month, the highest since January and up from 1.2% the month before. That increase was less than half the pace of inflation, which is rising 11.1%.

“Sales picked up as Black Friday discounting marked the beginning of the festive shopping season,” said Helen Dickinson, chief executive of the British Retail Consortium. “However, sales growth remained far below current inflation, suggesting volumes continued to be down on last year.”

The figures indicate that consumers are straining to maintain their standard of living after the tightest squeeze on their spending power in decades. Soaring food and energy prices are requiring shoppers to spend more on essentials, leaving retailers concerned there will be little left aside for other goods.

Non-food retail sales were flat in November, adding to evidence that shoppers are cutting back on non-essential spending.

The value of food sales increased 5.8% in the three months to November, less than half the 12.4% rate of inflation in the sector, BRC figures show. That implies consumers are having to pay more to buy the same basket of goods -- or that they’re cutting back the volume of goods they buy.

“The UK market continued to see real terms decline in November,” said Susan Barratt, chief executive officer of IGD, which provides analytics for retailers. “However, that decline has slowed versus October with shoppers shifting into recognizable ‘seasonal’ mode as November wore on. Some additional demand also emerged as the World Cup got underway.”

Sales in furniture and household appliances grew in November as people prepared to host festive gatherings. Retailers are concerned consumers will soon scale back spending as higher costs constrain their budgets.

“The next few weeks could be critical,” said Paul Martin, UK head of retail at KPMG. “Given the economic headwinds for the year ahead, with consumer behavior expected to evolve further as shoppers look to trade down and purchase less, understanding and meeting customer needs will be mission critical for retailers.”