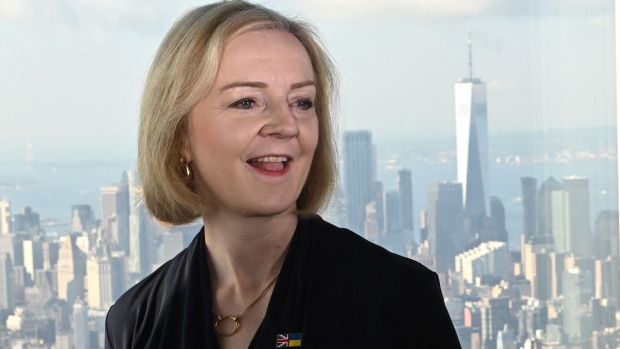 Prime Minister Liz Truss said her government will pursue an “unashamedly pro-business” agenda by lowering and simplifying taxes in the UK.

“We want lower, simpler taxes in the UK to incentivize investment, to get more businesses going,” Truss told a meeting of senior business figures in New York on Wednesday, according to a readout from her office.

Truss said Chancellor of the Exchequer Kwasi Kwarteng will announce a series of measures later this week designed to deliver on the tax-cutting promises she made during the Conservative Party leadership contest this summer. She said her government will follow through on pledges to reverse this year’s 1.25 percentage-point increase in National Insurance, a payroll tax, and to scrap next year’s planned rise in corporation tax to 25% from 19%.

The remarks are the Truss’s clearest recitation yet of the agenda her government is setting after just two weeks on the job, one of them interrupted by the death of Queen Elizabeth II.

On Wednesday, the government unveiled a package that may touch £40 billion to help all businesses with soaring energy bills over the winter. And on Thursday, ministers aim to publish a plan to overhaul the country’s creaking health care system.

All together, economists are expecting that by the end of the week the new government will have set out £200 billion or more in new spending commitments and tax cuts, forcing the government to borrow more at a time when interest rates are rising rapidly. That’s putting the public finances on an unsteady footing.

Parliament will sit an extra day on Friday to hear from Kwarteng before recessing for the annual party conference season.

“We won’t be raising corporation tax, as was planned,” Truss said. “We’ll be reversing the National Insurance rises which took place earlier this year. And the chancellor will be announcing various other simplification measures.”

Kwarteng’s program will include a reduction in stamp duty on home purchases, the Times reported on Wednesday. Government officials declined to deny the report, with Foreign Office Minister Gillian Keegan telling Times Radio: “We’ll have to wait and see what the chancellor says. But those kinds of policies that have been used in the past are there to really get the economy moving.”

It’s a measure the Conservatives have used in the recent past: former Chancellor Rishi Sunak brought in a temporary freeze on stamp duty during the coronavirus pandemic in order to stimulate the housing market.

Truss said Kwarteng also will lay out “a series of supply side reforms to make our economy more productive over the long-term, in areas like financial services.”

She promised to “deal with” the Solvency II and MiFID regulations governing insurance and trading that are a legacy of EU membership, and also to get roads, broadband infrastructure and mobile phone masts built.

“While this is just the start, our long-term plan is to simplify Britain’s taxes and to make us a better place to invest and be unashamedly pro-business,” she said.