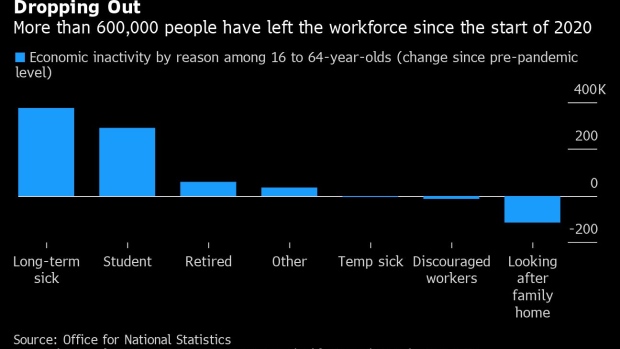 LONDON, ENGLAND - MARCH 17: A woman wearing a face mask is reflected in the window of a closed barbers in the square mile on March 17, 2021 in London, England. Hairdressers in London have been closed since December and are scheduled to reopen April 12. A year since the British government issued its first stay-at-home order in response to the Covid-19 pandemic, on March 23, 2020, the City of London is still a ghost town of shuttered shops and restaurants, scarcely populated offices, and negligible tourist traffic. Even as the UK prepares to ease the current lockdown measures, a sense of normality in the city's historic financial district feels a long way off. (Photo by Dan Kitwood/Getty Images) Photographer: Dan Kitwood/Getty Images Europe , Photographer: Dan Kitwood/Getty Images Europe

(Bloomberg) -- At least 500,000 British workers dropped out of the labor market due to poor health since the pandemic, adding to the difficulty companies report in finding staff.

About 2.5 million people cited long-term sickness as a reason they were unable to work this summer, up from 2 million in early 2019, the Office for National Statistics said Thursday. Those reasons include chronic illness and mental health issues, with the largesst increase reported by younger people aged 25-34.

The figures shed light on why the labor market remains so tight even as the UK economy heads into a recession. Bank of England Chief Economist Huw Pill earlier this week described a drop in the size of the workforce as a “real shock” that’s fanning inflationary pressures by driving up wages.

Industries with less flexibility around home or hybrid working are most exposed to worker sickness, the ONS data show. Retail, transport and hospitality sectors were the most impacted by the spike in long-term illness, with around 10 in every 1,000 workers now inactive because of ill-health -- double the UK average.

British businesses have complained about the difficulity in finding staff to fill jobs since the middle of 2021, when ending Covid lockdowns prompted a rapid reopening of the economy. More than 600,000 people have left the workforce since the pandemic struck, with long-term sickness a contributing factor.

Hospitality and retail, typically populated by younger workers, have been among those suffering the biggest deficit of staff.

The ONS said waiting times in the National Health Service, the long-term impact of Covid and an aging workforce are potential factors fueling the high level dropouts from the workforce due to sickness.

Inactivity among 25-34 year olds rose to 14% in the period between April and June 2022, from 11% in the same period in 2019. Men constituted 61% of the increase. Mental health issues, phobias and nervous disorders rose by 24% among the youngest groups of workers aged between 16-34 years. It was the only age bracket to see an increase in anxiety and depression.