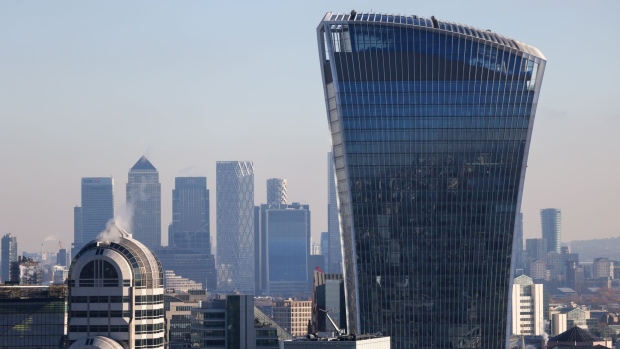 The skyscraper at 20 Fenchurch Street, also known as the Walkie Talkie, in the City of London, UK, on Thursday, Dec. 8, 2022. The UK government is set to announce a package aimed at boosting growth in financial services and the City of London on Friday, according to people familiar with the plans. Photographer: Hollie Adams/Bloomberg , Bloomberg

(Bloomberg) -- The UK’s Financial Conduct Authority says that some City of London firm may struggle to implement its new consumer protection rules, which come into force at the end of July.

A focus on protecting consumer is a cornerstone of the regulator’s three-year strategy, which also includes an emphasis on data collection and analysis, and improving diversity and inclusion. Firms are expected to consider the likely outcomes their customers will receive over the full life cycle of their product offerings.

A FCA review of a sample of implementation plans found many firms had embraced the shift “and have established extensive programs of work to comply with it properly,” according to a press release Wednesday. But it also found “some firms are further behind in their planning” and “may struggle” to implement the new so-called consumer duty.

“Given the scale of the reform, we recognise that some firms need to make significant changes,” Sheldon Mills, executive director of consumers and competition at the regulator, said in the statement. “For firms which are further behind in making the necessary changes, there is time to put that right and for them to show they are acting in the spirit of the new duty.”

The proposals are designed to push firms to compete in the interests of retail customers. The shift was introduced after the FCA came under criticism for its inaction over a mini-bond scandal that exposed customers to losses on more than $300 million in investments.