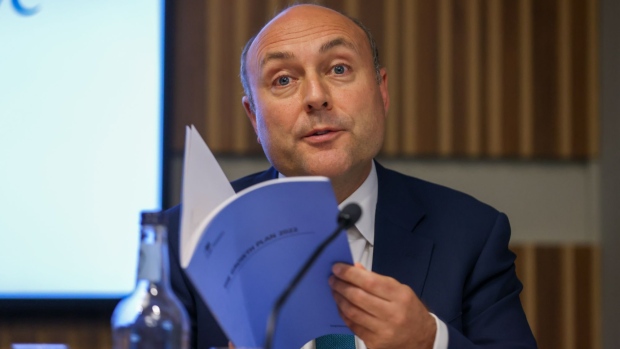 (Bloomberg) -- The UK scrapped a controversial plan to give itself an intervention power over financial regulators, saying it already has the necessary authority to slash red tape and boost competitiveness of the financial services sector.

City minister Andrew Griffith said in a statement the government had decided not to proceed with plans to insert a so-called call-in power into the Financial Services and Markets bill, which is going through Parliament.

“The existing provisions in the bill are currently sufficient and will already allow us to seize the opportunities of Brexit by tailoring financial services regulation to UK markets to bolster our competitiveness,” Griffith said.

The U-turn is likely to be seen as another move by Prime Minister Rishi Sunak’s government to repair relations with the Bank of England and regulatory bodies, after a fraught period during Liz Truss’s short-lived administration.

The plan for a call-in had previously stirred controversy. Proponents argued it would have added democratic oversight by British lawmakers over regulators now that the UK has left the European Union. But critics including the bosses of the prudential and consumer regulators said it threatened to undermine their independence and damage the reputation of the UK.

Griffith had said earlier this month the government was still pressing ahead with the power, but delaying the point at which it would be added to draft legislation which is to be the UK’s post-Brexit framework for banks, insurers and asset managers.

Yet there was growing speculation the government might abandon the plan after it thrashed out an agreement with regulators over insurance capital reforms, which were announced after months of wrangling alongside Chancellor of the Exchequer Jeremy Hunt’s fiscal statement last week.

A call-in power was seen by ministers as a way to get the Prudential Regulation Authority to soften its position on Solvency II changes. With that deal done, there was less need for the power to be added to the bill, people familiar with the matter have said.

A spokesperson for the PRA said “the key decisions will now be for Parliament and we will implement those decisions faithfully,” after the Treasury’s announcement on the change last week.

“We have always been keen to find the right balance between increased responsibility for the regulators, with clear accountability, appropriate democratic input, and transparent oversight,” Griffith said. “We remain committed to the operational independence of the financial services regulators.”

EXPLAINER: How the UK Plans to Get a ‘Big Bang’ Out of Brexit