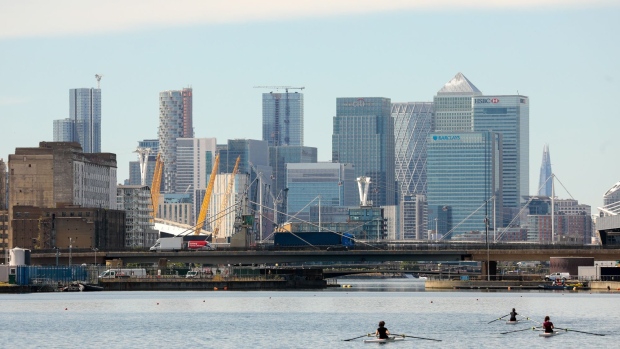 Rowers row on the River Thames in view of the Canary Wharf business, finance and shopping district near the ABP Royal Albert Dock(RAD) development, by Citic Construction UK Ltd., in London, U.K., on Thursday, July 30, 2020. Overlooking the Thames, along the old Royal Albert Docks and across the water from City Airport, stand more than 20 new buildings that form the first phase of a 1.7 billion-pound ($2.2 billion) project. Photographer: Jason Alden/Bloomberg , Bloomberg

The UK government is backtracking on plans to scrap a 45% rate of income tax for the country’s highest earners. Chancellor of the Exchequer Kwasi Kwarteng announced the decision in a tweet early Monday, saying “we get it, and we have listened.”

Southern Water  Ltd and Thames Water Utilities Ltd: The water providers will have to return almost £80m to their customers due to missed targets, regulator Ofwat says.

Prosus NV: The company has decided to cancel a $4.7 billion deal to buy Indian payments firm BillDesk after conditions on the deal weren’t met, Prosus said in a statement on Monday.

The pound received a temporary boost from Kwarteng’s u-turn in policy before giving up a chunk of its gains. Government bond yields fell for a second-straight day.

A petition calling for an immediate UK general election is rapidly gaining support, racking up about 4,000 new signatories every hour. “A change in the leader of the governing party does not trigger a general election,” the government said in a Sept. 20 response to the petition.

London is on the verge of losing its place as Europe’s biggest equity market — to Paris.

Guillaume Pousaz built London-based Checkout.com into a force in electronic payments and is now poised to become a tech rainmaker.

Sandwich chain Greggs Plc is due to update the market tomorrow.