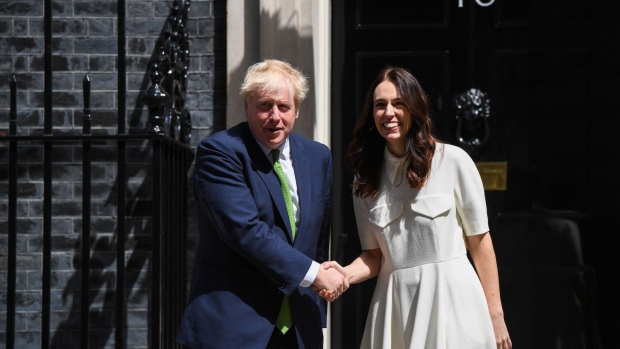 Boris Johnson, UK's prime minister, left, and Jacinda Ardern, New Zealand's prime minister, ahead of their bilateral meeting at 10 Downing Street in London, UK, on Friday, July 1, 2022. Johnson’s deputy chief whip has resigned from his position as a government enforcer due to an incident involving excessive drinking, adding to the premier’s woes as he returns to the UK. , Bloomberg

(Bloomberg) -- The UK is rattling off a series of international science agreements with a message to the European Union: if you don’t want our money, we’ll do deals elsewhere.

Prime Minister Boris Johnson signed a memorandum of understanding with his New Zealand counterpart, Jacinda Ardern, on Friday, aimed at easing UK access to the Pacific nation’s quantum and agricultural technology. The UK has already negotiated similar agreements with Israel, Switzerland and Canada -- as well as EU member Sweden, and is hoping to seal more with Japan, Singapore, South Korea and certain US states.

The drive comes as the government seeks to diversify the country’s scientific collaboration after the UK was frozen out of the EU’s £80 billion ($96 billion) Horizon research program because of tensions stemming from Britain’s plan to override the part of the Brexit deal governing Northern Ireland. The majority of the UK’s international science budget -- around £15 billion -- is usually spent helping to fund Horizon.

“With the EU blocking us we are signaling loud and clear to the rest of the world that our international science budget is ring-fenced,” science minister George Freeman said in an interview on Friday. “If the EU don’t want the £15 billion we had earmarked we will do more beyond the EU, with other countries.”