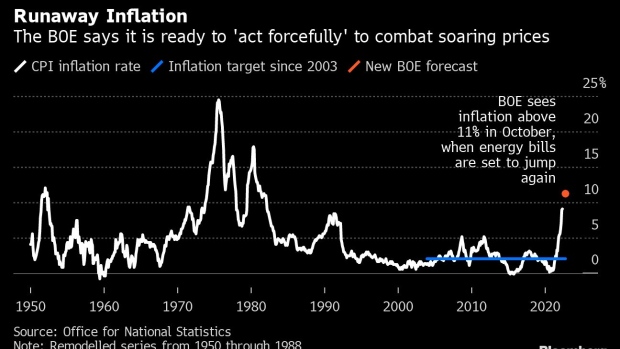 (Bloomberg) -- Battling to contain the UK’s worst rail strikes in 30 years, Prime Minister Boris Johnson’s government is moving ahead with legislation to allow employers to use agency workers to stand in for those taking industrial action.

The framework to be introduced Thursday by Business Secretary Kwasi Kwarteng will peel back what the government called “burdensome legal restrictions” and help counter future walkouts, according to a statement from the Department for Business, Energy and Industrial Strategy.

The move comes as some 40,000 rail workers staged a second one-day strike over pay and conditions on Thursday after talks between employers and the National Union of Rail, Maritime and Transport Workers failed to produce a deal. The first stoppage on Tuesday brought much of the nation’s rail network to a standstill, and a third is planned for Saturday.

“The situation we are in is not sustainable,” Kwarteng said. “Trade unions are holding the country to ransom by grinding crucial public services and businesses to a halt.”

RMT General Secretary Mick Lynch is pushing 13 train firms and track operator Network Rail for pay rises to match soaring inflation, as well as a guarantee that there will be no compulsory layoffs as part of the settlement.

The union is “working constructively” with the rail companies but the government is a “silent partner” and should be taking part in talks, Lynch told the BBC. Further strikes are likely if a settlement isn’t reached, he said.

Johnson’s administration faces the prospect of what the UK media has dubbed a summer of discontent, with barristers also planning strikes and teachers and postal workers warning they too may take industrial action. Late on Wednesday, National Education Union Deputy General Secretary Niamh Sweeney told Sky News that a strike is more likely than at any point in the two decades she’s worked in the teaching profession.

Inflation at a four-decade high of 9.1% and predicted by the Bank of England to hit double figures later in the year is squeezing household budgets and leading workers to clamor for wage increases that keep pace with rising prices.

“The pay simply hasn’t kept up with other graduate professions and teachers are saying to us that they are finding it difficult,” Sweeney said, adding that many are “struggling to survive” as heating bills rise.

The RMT’s Lynch and Transport Secretary Grant Shapps have clashed repeatedly over the rail crisis, with the potential use of temporary workers one of the sore points. Lynch -- who has become a minor celebrity due to his handling of TV interviews -- says the staff won’t be adequately trained and union members would encourage them not to go to work. The government denies that will be the case.

“Businesses will still need to comply with broader health and safety rules that keep both employees and the public safe,” BEIS said. “It would be their responsibility to hire cover workers with the necessary skills and/or qualifications to meet those obligations.”

The changes will be made through a so-called statutory instrument that’s subject to Parliamentary approval. The government said it hopes the rules will come into force “over the coming weeks.”