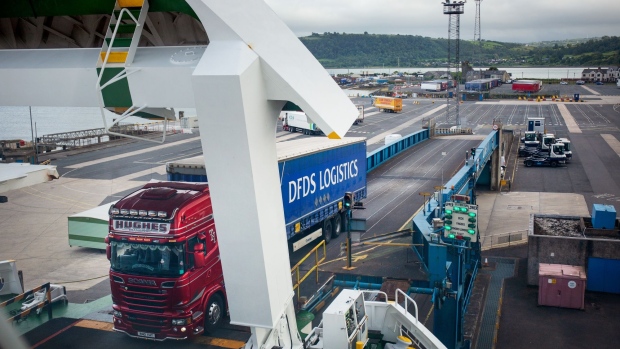 A haulage trucks boards a ferry at Larne Port in Larne, Northern Ireland, UK, on Wednesday, July 6, 2022. British Prime Minister Boris Johnson wants Parliament to pass his plan to override the Brexit deal by the end of 2022, but it could take as long as a year to become law if the House of Lords digs in. , Bloomberg

The UK sees the prospect of a deal with the European Union on Northern Ireland’s trade arrangements within weeks as relations thaw following a protracted stalemate.

The government is optimistic a negotiated settlement can be reached “in the next few weeks,” now that talks have restarted, Northern Ireland Secretary Chris Heaton-Harris said Tuesday at the Conservative Party conference in Birmingham. Foreign Secretary James Cleverly said that “the tone has improved.”

The progress in resolving differences with the EU over trade between mainland Britain and Northern Ireland raises the chances of the UK repairing relations with its biggest trading partner and finally drawing a line under Brexit negotiations more than six years after the country voted to leave the bloc.

At issue is the Northern Ireland protocol -- the part of the Brexit deal that keeps the province in the EU’s single market for goods to avoid imposing a hard border on the island of Ireland. The EU wants the UK to implement the checks between Britain and Northern Ireland it signed up to in the protocol, while the UK argues that the arrangements unnecessarily snarl up domestic trade.

Why Northern Ireland Keeps UK and Europe at Odds: QuickTake

The UK sees agreements on trade flows as achievable, two people familiar with the matter said, speaking anonymously about private discussions. But they warned that despite the improvement in the mood music, there are still plenty of sticking points to work through.

UK officials hope a deal can be reached before the end of October -- the deadline for when Northern Ireland’s power-sharing government must be formed to avoid an election being called. It’s currently suspended because unionists refuse to participate until the protocol is removed.

To win their backing for any deal, Prime Minister Liz Truss will need to show the unionists -- as well as her ruling Conservatives -- that it doesn’t treat Northern Ireland differently from the rest of the UK.

For now, the Democratic Unionist Party is sticking to its guns. Former Leader Edwin Poots told the Irish national broadcaster RTE on Tuesday that unless the EU becomes “a bit more realistic,” US President Joe Biden’s planned visit next year to the region to mark the 25th anniversary of its peace deal will instead coincide with the agreement’s “funeral.”

The UK and EU have been at loggerheads since talks froze earlier this year. In one of her last acts as foreign secretary, Truss introduced a bill to scrap large parts of the Brexit agreement and replace it with new rules on customs checks, tax and arbitration -- a move which exacerbated already testy relations with the EU.

But the UK has softened its approach of late, leading to a significant shift in the dynamic. The relationship began to pick up when former Northern Ireland minister Conor Burns spent time with Ireland’s Simon Coveney and the EU’s Maros Sefcovic in Oxford, England last month, a person familiar said.

Since then, despite her Eurosceptic rhetoric, Truss appears to have softened her approach by re-starting talks and choosing to attend French President Emmanuel Macron’s new European political “club of nations” in Prague later this week.

The new conciliatory tone was in evidence in Birmingham, when Northern Ireland Minister Steve Baker -- one of the strongest advocates for a so-called hard Brexit during the negotiations -- apologized and said it was time to “move on” from past disagreements.

“What we can see here is a real change in the attitude from everyone,” Baker said. “The mood is shifting and people do want a negotiated solution.”