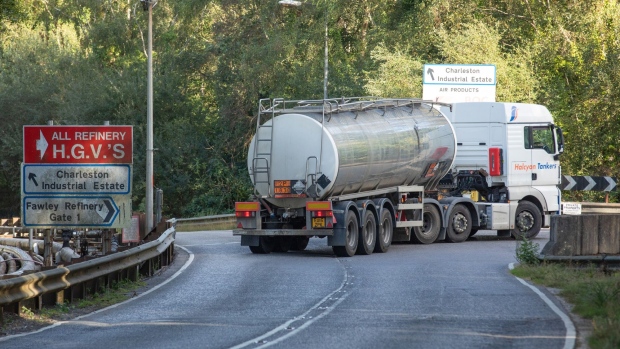 (Bloomberg) -- Drivers in the UK are facing record petrol prices, yet the country is exporting millions of liters of the fuel each month to the US, where motorists pay little more than half as much to fill their tanks.

The UK has the second-highest petrol prices among the Group of 20 members — only French drivers pay more. And UK petrol prices aren’t just high, they’re rising at the fastest rate in 17 years. Across the Atlantic, drivers in the US also face their highest gas prices on record, but they still pay only about 60% of what the British do.

So why will something like 3 billion liters of petrol, and the components to make it, be shipped from the UK to the US this year? Almost entirely because of taxes.

The flow in May from the UK to the US reached 1.85 million barrels, or 300 million liters, a 15% increase from the previous month and the highest since December, according to shipping analytics company Vortexa Ltd.

The UK is part of an international trade network in both crude and refined products, with cargoes coming into and shipping out of the country to meet different fuel specifications in different parts of the world.

But the more obvious reason this is happening is that the value of gasoline to its producers isn’t the same as the prices paid by motorists. And the difference is taxes.

There are two taxes on petrol in the UK: fuel duty and value-added tax. Fuel duty is levied at a fixed rate, which is currently 52.95 pence per liter on unleaded petrol after the government cut it by 5 pence per liter in March. That level of duty doesn’t change with the underlying price of the fuel.

But the second tax, VAT, does. It is levied at a rate of 20% on both the underlying fuel price and the fuel duty. That means UK motorists pay tax on the tax.

Of the £1.76 paid on June 6 for a liter of petrol in the UK, 82 pence, equivalent to $3.89 or 47%, went to the government treasury through a combination of fuel duty and VAT. The rest covered the cost of the crude oil, its delivery and processing, and the transport of the finished product to the pumps. Plus, there are profit margins for the companies involved in each step of the supply chain.

Once you take off the taxes and the costs associated with delivery to gas stations, the relative economics of selling petrol the UK and the US start to look very different — different enough to make it attractive to ship the fuel across the Atlantic to a market that appears to offer far lower prices.